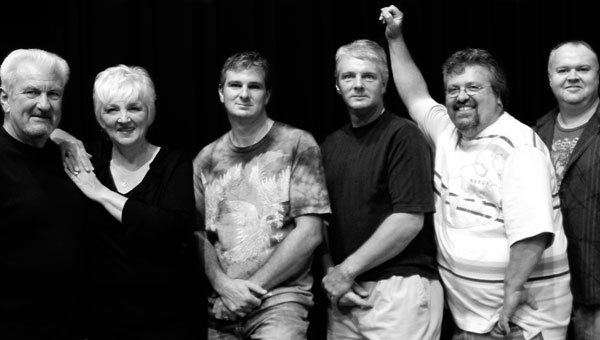 “If God had shown us, back down the road, that we’d be doing this, we would have been scared to death,” said Jean Brasher of Chelsea, after a recent Southern Gospel concert by her family.

Several years ago, while singing with her husband Larry and another young couple, people began asking to book them. But they said, “We don’t do that.”

However, they began to wonder if God was trying to lead them in that direction, and after lots of prayers, they took a booking.

That led to a 23-year singing ministry where they traveled across the country and into Canada, singing with some of the top groups in Southern Gospel music. They never made calls to get bookings, Brasher said. But they sang up to 180 days a year — in churches, at outside festivals and even at Wal-Mart and Kmart.

The family quit the road nine years ago, when younger band members became busy with their own families. Today, they play closer to home.

Elder son, Mike, was 9, when they on faith invested in some second-hand drums, then anointed him and prayed over him, “asking God to open his ears.” He’s had an ear for music ever since, Brasher said.

Later, Mike decided he wanted to play bass guitar. He closed himself in his room practicing for a while with a tape, then came out ready to go onstage.

Daughter Melissa Grimes played tambourine until she married. Several other young people have sung or played with the group. Daughters-in-law Janah and Teresa, and Stephanie Howell, sometimes sing with them today.

“Younger family members are working on some things to try to keep the ministry going,” Jean Brasher said. “I’m so thankful that they have a heart for ministry.”

“It’s so rewarding,” she said. “To see people in ministry who were saved in one of your singing services.”

Some of their most rewarding experiences came through singing at Jimmy Hale mission once a month, said Brasher.

“Shannon would stand on the piano bench and sing,” she said.

“Those men had been through so much, and some won’t listen to a preacher,” she said. “But the music draws them, and they get saved.

“There’s nothing like doing what you know God put you here to do,” she said.

Around 50 students from area schools enjoy music by the New Heights Methodist Church worship band at the “Blessing the... read more