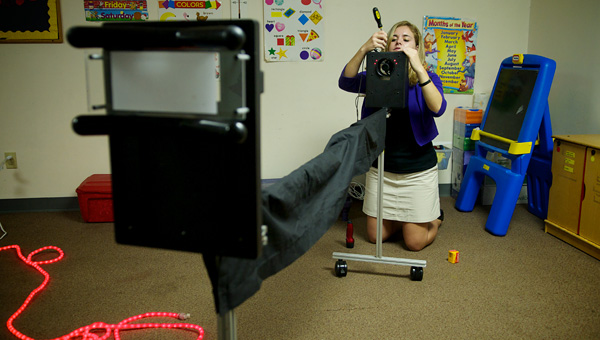 CALERA — A group of 2-year-olds toddled into a dark room at Mrs. Cynthia’s Preschool & Daycare Sept. 3 and with a little coaxing, placed their eyes against one end of a long camera device.

The camera snaps a picture of their dilated pupils to later be examined for possible vision problems.

About 35 children received these free eye screenings by FocusFirst, a nonprofit organization that provides free screenings and cost-effective vision solutions for underprivileged children.

The free screenings are much easier and more accessible for many families, said Lauren Gossett, Impact Alabama Regional Coordinator, who facilitated the screenings in Calera.

It takes just a few minutes to take the pictures, which are then sent to an eye vision research center in Birmingham. The center develops and examines each photo looking for signs of eye diseases or disorders such as near or far sightedness or stigmatisms, Gossett said.

In six to eight weeks, the results are delivered to parents along with cost-efficient options for glasses and other vision solutions. Some problems, if left undetected, can cause blindness later in life, Gossett said.

Many of the children she screens have never been to an eye doctor before, she said.

“Especially at this age, it’s so critical to get them screened,” She said. “I went without glasses until s grade and always thought what I saw was normal. We’re helping kids now so when they get into school this won’t effect their education.”

Cynthia Patterson, owner and director of the Calera preschool, said she has the FocusFirst team visit her facility every year.

“It’s free for the parents and its not invasive to our curriculum,” she said. “All my kids had glasses in elementary school, so I know how important it is.”

A potential problem has been detected in approximately 11.9 percent of the children screened, Gossett said.