Jaguars starting over after loss to Hoover 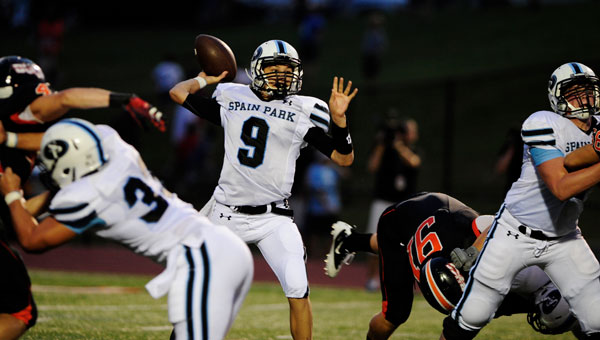 Spain Park High School interim head football coach Ben Berguson knew he had a rough stretch ahead of him when he accepted the role Aug. 26.

Berguson didn’t expect it to get this bad after watching his team struggle Sept. 3 in a 44-0 shutout against rival Hoover.

After playing “the toughest three-game stretch in the nation” during the last three weeks, Berguson and the Jaguars are attempting to start over and put the past behind them.

“We just need to find a way to have some success and get our confidence back,” Berguson said.

Success and confidence were hard to come by against the Bucs, as the Jaguars totaled only 94 yards and six first downs on offense in the Shelby County Reporter Game of the Week.

Spain Park (0-2, 0-1 in Class 6A, Region 6) failed to cross the 50-yard line until the third quarter and only saw two drives reach Hoover territory.

Sophomore quarterback Nick Mullens completed 6-of-16 passes for 39 yards without a touchdown or interception. Junior running back Jon Mwaituka rushed for 37 yards on eight carries and caught two passes for 11 yards before leaving the game with an ankle sprain in the third quarter.

Junior Reid Reinagel, the Jaguars’ first-string quarterback, rushed for 23 yards on eight carries while splitting time behind center and at wide receiver. Reinagel is still recuperating from a shoulder injury.

Meanwhile, the Spain Park defense struggled one week after a solid performance against Grayson (Ga.) High School in the Progressive Football Challenge.

Playing without linebacker Alex Payne, a senior captain who broke a bone in his hand during practice Aug. 31, the Jaguars gave up 44 points before halftime.

Berguson said Payne, a three-year starter who has recorded 100 tackles in each of the past two seasons, will have surgery on his hand Sept. 6 and expects to have him back on the field in a couple of weeks.

“We need him,” Berguson said. “He’s been our leader on defense.”

Berguson gave credit to his players for not folding in the second half with an insurmountable deficit. The Jaguars kept the Bucs out of the end zone in the final 24 minutes.

“I was just glad our kids didn’t quit,” Berguson said.

Spain Park plays host to Homewood in another Class 6A, Region 6 battle Sept. 10.