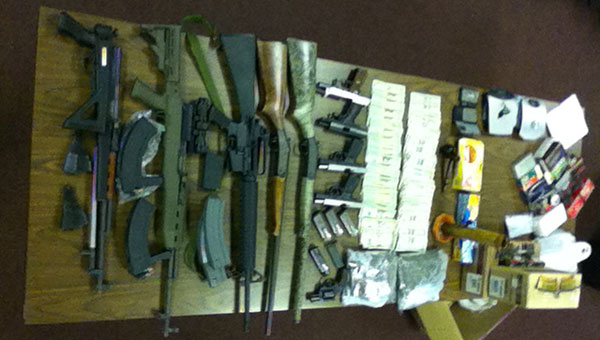 Guns, drugs and paraphernalia seized in a raid of a Shelby home Aug. 26.

SHELBY — The Shelby County Drug Enforcement Task Force raided a home in Shelby Aug. 26 and seized 10 guns, 2 pounds of marijuana and more than $3,000 in cash.

The task force raided the home in response to a search warrant for the house in the 100 block of School Road, said Lt. Chris George, commander of the task force.

Cody Talton, 20, and Savannah Dois Horton, 20, were both arrested for possession of a controlled substance and possession of drug paraphernalia.

Talton is currently being held in the Shelby County Jail. Horton has made bail. Both were charged with possession of marijuana in the first degree and possession of controlled drug paraphernalia.

George said the amount of weapons recovered illustrates the danger of drug activity in Shelby County.

“Obviously he felt like he needed to protect his trade,” George said. “And that’s what he did. It’s very dangerous to have a mix of guns and narcotics.”

George said the mix of guns and drugs falls under federal statutes and the two will likely face federal charges with harsher penalties.