Hornets come back against Aggies 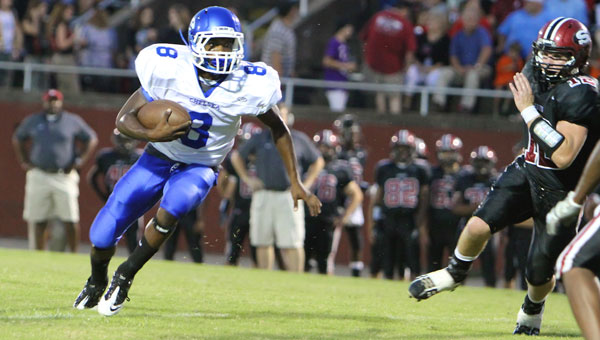 Ganus’ 8-yard touchdown pass to Jake Campbell with 39 seconds left to play capped a 16-play, 79-yard drive to tie the game, and placekicker Ashley Page’s fifth extra point of the night proved to be difference for the Hornets.

The offense carried over the momentum gained by the defense, which stopped Sylacauga (1-1, 0-1 in Class 5A, Region 5) just short on a fourth-and-6 to set up the game-winning drive.

Chelsea crept closer with an earlier fourth-quarter drive. The Hornets marched 80 yards in 11 plays and finished it off when running back D.J. Washington ripped off a 9-yard touchdown run to make the score 34-28 with 6:06 left in the fourth quarter.

Washington finished with 77 yards on 17 carries and two touchdowns.

“I’m so proud of how (my players) played on the road,” Chelsea coach Wade Waldrop said. “You have to deal with all those elements, but they never quit. They never gave up.”

Sylacauga jumped out to an early 14-0 lead before Chelsea tailback Julius McCall found the end zone from 28 yards out on the ground to make it 14-7 with 2:09 left in the second quarter.

The Aggies would score again to take a 21-7 lead into halftime.

Chelsea will look stay undefeated in region play next week, as the Hornets host Shelby County on Sept. 10. Sylacauga will try to pick up its first region win at Talladega on the same date.

Montevallo falls on the road at Greensboro

The Montevallo High School football team dropped its second game in a row to start the 2010 season following a... read more