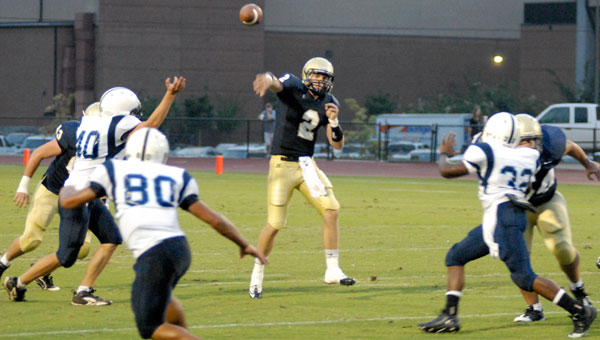 For the fans who attended Briarwood Christian’s contest against region foe Moody Sept. 3, they saw a football game quickly turn into a 24-minute magic show.

Briarwood quarterback Ben Craft was the magician on this night, seemingly hypnotizing the Moody defense and concocting five first-half scoring drives to register a 42-6 win over the Blue Devils at Lions Pride Stadium.

The trick of choice was the touchdown pass for Craft, who pulled four of them out of his hat to go along with 232 yards on 19-of-25 passing.

Briarwood coach Fred Yancey said he felt like his offense didn’t have a choice.

“Moody was stopping our run,” Yancey said. “It was as simple as that. Our big ole boys were just getting stuffed up front, and we had to do what we’re pretty good at, which is pitching and catching.”

Running back Matthew Furuto chipped in 28 yards on six carries and scored on a 2-yard run.

After six consecutive running plays to open the game, the Lions went to the air. Craft found tight end Canon Smith for an 11-yard gain down to the Blue Devils’ 38-yard line.

On the next play, Craft allowed time for wide receiver Devin Bowman to make his way across the field and hit him in stride. Bowman did the rest, as the junior broke a couple of tackles along the sideline and outraced the Moody defense to the end zone with 8:22 left in the opening quarter to start the scoring.

The Briarwood offense took over at Moody’s 24-yard line after the defense forced a three-and-out and went to work again. After going backwards as a result of a holding penalty — one of 17 yellow flags thrown against Briarwood — the Lions eventually found the end zone for the second time in the opening quarter on Craft’s 4-yard touchdown toss to wide receiver Turner Herron with 2:55 remaining.

Craft and the offense were just getting started.

Craft capped the Lions’ first-half scoring with 1:46 left in the second quarter, finding sophomore Daniel Robert on a deep slant over the middle  for a 20-yard scoring strike to give the Lions a 35-0 lead at the break.

Yancey wasn’t surprised by the performance of his quarterback.

“Ben is a guy who’s really worked hard for years for this moment, and he’s not going to let it slip by,” Yancey said. “He’s going to be ready to play.”

Craft said his wizardry wouldn’t have been possible without a solid supporting cast.

Craft’s last act was to disappear and give way to second-team quarterback Jon Stapleton, who found wide receiver Carter Tyra behind the defense for a 49-yard touchdown with 7:01 left in the fourth quarter for Briarwood’s only second-half score.

The Briarwood defense was up to its old tricks, as the Lions held the Moody offense to 99 total yards and forced a three-and-out on five of the Blue Devils’ nine possessions.

Quarterback Michael Barron had an 18-yard touchdown pass for Moody.

Briarwood will continue region play in its next game at Erwin Sept. 10 while Moody hosts Pinson Valley on the same date.

The Calera High School football team fell 52-20 on the road at Beauregard in a Class 4A region matchup Sept.... read more