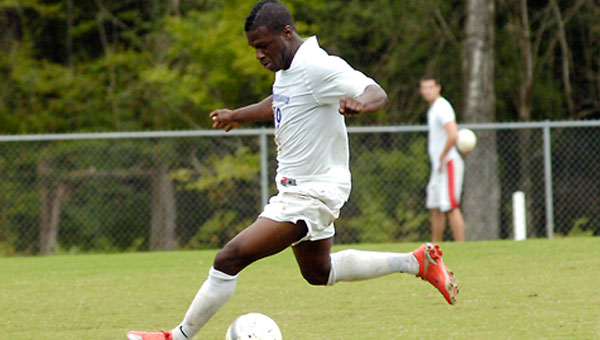 The Falcons stunned fifth-ranked Tampa, 2-1, in double overtime Sept. 3 at the Cougar Invitational in Columbus, Ga.

Montevallo scored with just 53 seconds left in the game as Alex Ghoja took a shot that deflected off the keeper and found the feet of Nick Saboe, who knocked in his first career goal to seal the win.

The Falcons fell behind late in the first half as Tampa scored off a set piece with just under three minutes to play. Montevallo came roaring back in the second half as Austin McIntosh sent a long throw into the box that was headed in by Nathaniel Foster to tie the game at 1-1 with 32 minutes left in regulation.

Both team were held scoreless the rest of regulation and the entire first overtime period. Freshman Brendan Ledgeway started in goal for the Falcons and made three saves in the win.

Montevallo remained perfect on the season with a 1-0 win over Eckerd thanks to a penalty kick from junior Phil Jackson with just under 20 minutes left in the Sept. 5 contest.

Ledgeway picked up his second win of the season and first career shutout as he made five saves.

The University of Montevallo women’s soccer team opened the 2010 season Sept. 3 with a 1-0 win over Eckerd College.

Freshman Christine Prince came of the bench midway through the first half and provided the spark the Falcons needed. Sophomore Paige Scott blasted a shot off the keeper from just inside the 18-yard box and Prince picked up the rebound and snuck it past the outstretched keeper for her first career goal as a Falcon.

Montevallo’s defense was solid the entire night as goalkeeper Alyssa Maxwell picked up her first shutout of the season without having to make a single save. The Falcons controlled the ball almost the entire game.

The University of Montevallo volleyball team opened the 2010 season Sept. 3-4 by dropping all four matches at the Holiday Inn Classic, hosted by Florida Southern University.

Montevallo was led by redshirt freshman Manyi Ati, who had a combined 26 kills over the two matches, including 19 in the five-set match with Southwest Baptist. Junior setter Anna Garrison tossed in a pair of double-doubles with 13 assists and 10 digs in the first match and 47 assists and 11 digs in the second match.

Freshman Michelle Carle led the team offensively with nine kills in the loss to Missouri S&T, while Ati and sophomore Virginia Clay chipped in seven kills each. Clay also led the team in blocks with five block assists.

Ati led the Falcons with 19 kills in the loss to Southwest Baptist. Clay added 15 kills and four blocks.

Wilson had a career-high 37 digs in the loss.