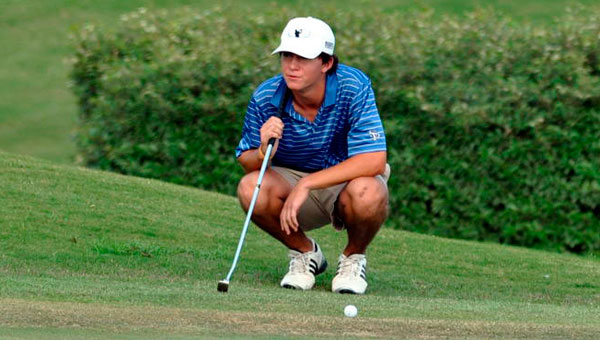 Spain Park High School golfer Michael Johnson made a 20-foot bogey putt on the last hole to post a 4-under-par total (68-72-72 – 212) and a one-shot victory over Jordan Spieth of Dallas and Emiliano Grillo of Bradenton, Fla., in a wire-to-wire victory in his first AJGA Invitational, which earned him a sponsor’s exemption to the Nationwide Tour’s Winn-Dixie Jacksonville Open Presented by Planters Oct. 18-24 at TPC Sawgrass – Dye’s Valley Course.

In cooperation with the PGA Tour, the American Junior Golf Association brought 78 players, ages 12-18, from 20 states and 13 foreign countries to The Players Stadium Course for a special junior golf experience. The Junior Players Championship was mirrored after The Players, and the 7,215-yard, par-72 layout matched the set-up used at the PGA Tour event.

All week, Johnson called his rounds a “roller coaster,” and Sunday’s final round didn’t deviate from the norm. He surrendered his lead with bogeys on Nos. 6 and 7, and as the final groups made the turn, Johnson was 2-under-par for the tournament and trailed Grillo and Spieth by a shot.

“My caddie told me ‘let’s get on the roller coaster again,’” Johnson said of his mindset as he walked to No. 10.

The ride began on the back nine, as birdies on Nos. 10, 11 and 12 enabled him to grab a two-shot lead. Johnson was 5-under-par and held that same two-shot cushion over Grillo and Spieth heading into No. 18, which was the hardest hole of the week (4.72 average). Johnson’s conservative tee shot found the right rough, and a toed 6-iron bounced into the water short and left of the green.

After Johnson’s pitch shot left him 15 feet for bogey, Grillo lipped-out a 60-foot birdie putt that would have put him at 4-under-par.

“I saw Emiliano’s putt and it was a really good read because he almost made it,” Johnson said.

Standing on the same line as Grillo, Johnson calmly knocked in his 15-footer and gave an exasperated fist pump after it found the bottom of the cup, and admitted after the round that he was tired after the whirlwind weekend that he’d endured.

Johnson planned on playing in the AJGA’s Woodward Video Junior at The Greenbrier in West Virginia, but one phone call changed the entire Johnson family’s Labor Day weekend plans.

“It just shows how many good golfers there are in the country that don’t get the chance to play Invitationals,” said Johnson, who gained entry into the event as the sixth alternate.

The American Junior Golf Association is a 501(c)(3) nonprofit organization dedicated to the overall growth and development of young men and women who aspire to earn college golf scholarships through competitive junior golf. The AJGA provides valuable exposure for college golf scholarships, and has an annual junior membership (boys and girls ages 12-18) of approximately 5,000 junior golfers from 49 states and 30 countries. To ensure scholarship opportunities for all junior golfers who have the skill, the AJGA created the Achieving Competitive Excellence (ACE) Grant program to provide financial assistance to young players in need.

Titleist, the AJGA’s National Sponsor, has been the catalyst and driving force behind the Association’s success since 1989. Rolex Watch USA, which is in its third decade of AJGA support, became the inaugural AJGA Premier Partner in 2004. In 2007, after 12 years of support, Polo Ralph Lauren became the AJGA’s second Premier Partner.

For more information regarding The Junior Players Championship, contact AJGA National Headquarters at (770) 868-4200, or visit Ajga.org.

The Oak Mountain High School volleyball team defeated Pelham for the second time in a span of three days to... read more