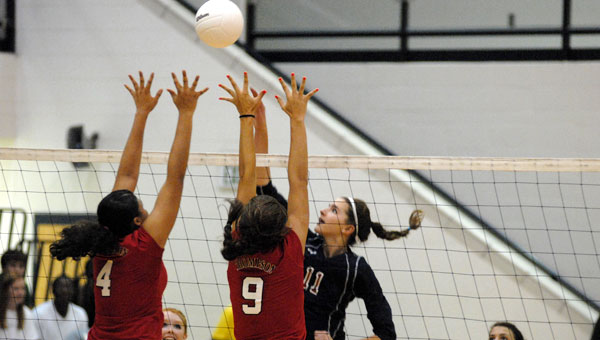 NORTH SHELBY — After sweeping area opponent Pelham on Sept. 2 and capturing the Mid-South tournament title at Thompson High School over the weekend, the Oak Mountain volleyball team continued its winning ways Sept. 7 with a 25-10, 25-17, 25-17 sweep over Thompson at Oak Mountain High School.

“The fact that all the kids got to play is a big thing,” Richardson said. “I want everybody on the team to have as much experience as possible. I feel good about the way we played.”

The Eagles’ front line gave the smaller Thompson lineup fits with its length, something that garnered praise from Richardson.

“It was one of the best blocking games that we’ve had,” Richardson said. “We were on it blocking-wise.”

The sentiment was echoed by Thompson coach Ellen Fleisher.

“They’re a tall team, and they are a talented team,” Fleisher said. “I felt like obviously we could’ve played better, but every time we play an opponent, we keep it on the floor and make adjustments and go from there.”

MaryAnn Lee finished with two kills and 13 digs. Kathryn Ray recorded a team-high 14 assists to go along with 10 digs.