If bones could talk 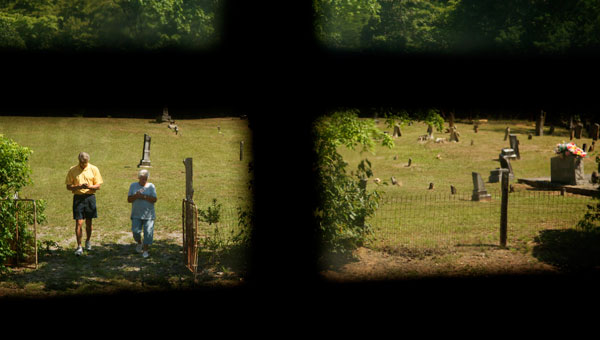 Tucked away on Shelby County 74 in Chelsea is 150 years of Norma Jean Howell’s family history.

There lies the Mt. Calvary Missionary Baptist Church, started in 1856 and rebuilt in 1901; there also lies its cemetery, just as old, located across the road from the old-fashioned wooden white church.

No one has attended services at Mt. Calvary since the mid-1960s, but memories of the church’s better days are still alive and quite well.

Howell, the church’s last surviving member, makes it a point to come out to the cemetery every couple weeks to spend time among her ancestors, families such as the Mooneys and the Brashers.

“It’s such a peaceful, peaceful feeling,” she said, gesturing to the graves. “You’re out here and if they could talk to you, they would.”

Walking among the tombstones, Howell stops to pick up a small American flag and root it in front of one of the grave markers. Patting the stone, she remarks, “That’s my great-grandfather.”

Not far away, Allan Staib pulls his weed trimmer out of his vehicle. Sweat drenches his face, but it doesn’t douse the passion he feels for his family history.

“I’m the backbone, or the muscle anyways,” he said.

Although Staib and Howell have only known each other a few years, they share a common lineage – the Mooney family. After talking about their family history at length, in May 2009 they decided to form the Friends of Mt. Calvary, a group devoted to preserving the grounds and the history of the church and cemetery.

“My mother and daddy would be so proud, and it breaks my heart they’re not here to see it,” Howell said. 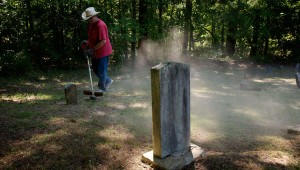 100 GRAVES WITH NO NAMES

There are more than 160 graves in the Mt. Calvary cemetery. Of those, only 62 have been identified – nearly 100 more are only marked with rocks.

“It’s just such a shame that there are 90-something markers there who we have no idea who they are,” Staib said.

While Staib and Howell will always be curious about those unknown, they are content to learn about those names they do know, with the help of Bobby Joe Seales, president of the Shelby County Historical Society, and Glenn Nivens, the recording secretary of the historical society.

On Aug. 19, the four met at the Old Shelby County Courthouse, now the headquarters for the historic society, to record their memories of the Mt. Calvary cemetery for posterity on Staib’s video camera.

When the four were able to identify the family members of John Armstrong, who has been buried in the cemetery since 1931, their excitement was palpable.

“This is just like finding an Easter egg, isn’t it?” Nivens said.

Seales knows what it’s like to put together the pieces of the puzzle when it comes to cemeteries. After all, cemeteries – and the history buried within them – is a big piece of Shelby County’s puzzle.

“These cemeteries tell so much history,” he said. “We have people from all over the United States come to do research here. Because somewhere along the line, their people came to Shelby County. If they died here, there’s a record of them in Shelby County somehow, somewhere.”

Right now, Seales and his staff know of 178 cemeteries in Shelby County. However, there are almost assuredly more.

“There are cemeteries we don’t even know about. I’m sure there are,” Seales said. “There are a lot of cemeteries that are neglected.”

He said although many people are interested in their family history, they may not know where their relatives are buried. That unawareness, combined with the fast pace of life today, means many cemeteries go ignored, left to be taken over by nature – or by progress.

Seales knows. One of his ancestors, John M. Seale, was buried at his home, a wooded area a quarter-mile inside the county line. Seales went to see the grave and discovered, to his surprise, it was right next to Interstate 65.

In fact, in 1966, John Seale’s grave had to be moved 100 yards from its original burial site to accommodate construction of I-65.

“I thought that was interesting, because back then, they just buried them in the backyard,” he said.

However, even the well-known and well-kept cemeteries can have problems. Seales said he’s seen well-meaning caretakers accidentally disrupt graves with equipment, such as riding lawnmowers.

He also said he knows people steal flowers from graves, especially around holidays.

“That happens a lot, especially on Memorial Day or Mother’s Day,” he said. 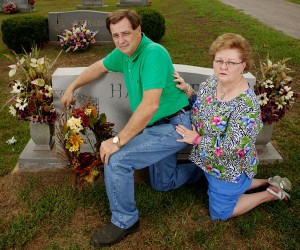 Because their flowers have been stolen before from the Vincent City Cemetery, Michael and Sandra Smith must secure the arrangements they bring to honor Sandra's father, Elon, who died in January of this year.

When Sandra Smith buried her father, Elon, in the Vincent City Cemetery in January of this year, she knew one thing: she had to keep his resting place looking nice.

“My daddy had this (plot) picked out before he died,” she said. “He was very persnickety about his lawn at home, and that’s why I’m so focused on the flowers. I know that would mean a lot to him.”

Unfortunately for Smith, her respect for her father led to an opportunity for others to profit.

After taking flowers to her father’s grave in mid-May, upon a return trip, Smith noticed one of the flower arrangements was missing. She reported it to the Vincent Town Hall, then went and bought two more flower arrangements and put them at the gravesite the next day, a Thursday. She attached a note stating, “Don’t steal my flowers.”

On the Friday of that week, she returned and both the arrangements were gone.

“Somebody who would do that, that’s just tacky,” she said.

“I’d like to take a stick to them,” Waldrop said. “That’s the lowest of lows.”

“I guarantee you, if I went to a flea market and someone tried to sell me something like that, I’d be suspicious,” she said.

However, neither of the two is optimistic the culprit will be caught.

“How are you going to catch someone like that?” Smith asked.

Vincent Police Chief James Srygley wishes he could find whoever stole the flowers, even if just to teach them such an act is disrespectful.

“That’s the only report we’ve had about vandalism in cemeteries in the last few years,” Srygley said. “I wouldn’t say it’s been a huge problem for us. It’s disrespectful. We do patrol the area, and occasionally we’ll find people in cemeteries after hours.”

Srygley said he treats such incidents as he would any other – he takes an incident report and searches for any evidence to pursue. If there isn’t any, however, the case is at a dead end.

“Obviously, if we could figure out who stole the flowers, we’d be interested in pursuing it,” he said.

Pelham Police Capt. Larry Palmer said the only cemetery crime he can recall in Pelham happened years ago, when someone stole a large American flag from a local cemetery. Capt. Jim Coker of the Hoover Police said, like Palmer, he can’t recall his city having any problems with cemeteries, but if anything were to come up, an investigation would be imminent.

“If somebody damaged a headstone or something like that, it’s not only a crime,” he said. “A cemetery is a very revered place. It’s there to honor the memories of our loved ones.”

Larry Wilson, who owns Cemetery Restoration Services South of Pelham, understands the need to honor loved ones. That’s what drives him to restore monuments and gravestones.

“A lot of times, just by looking at monuments, you can get a sense of what people were like,” Wilson said. “There’s a story behind every monument. There’s a legacy that’s been put out there.”

Wilson said there are very few people who restore old monuments in the country. It’s a profession handed down from a teacher to a student, from a father to a son, he said. Restoring monuments helps him to appreciate his own family history – both good and bad. Often, a gravestone is a starting point for people to find out more about their family members, he said.

“It’s like it says in the Bible. You can break those curses, generational curses, and put blessings in their place,” Wilson said. “There are lots of forgotten graves. The people who go find them out, there’s a pride associated with it, a good pride.”

Norma Jean Howell feels that pride. She’s saving up to have all the monuments in the Mt. Calvary cemetery cleaned, even though it’s at least $75 per monument.

“I wouldn’t want to do one without doing them all,” she said.

It may take a long, long time for her to be able to clean up the cemetery the way she wants – maybe even the rest of her life. But she’s got Allan Staib, Glenn Nivens and others like her, others who care about keeping memories of the dead alive and vibrant.

She also has a promise she made to someone she cares about deeply.

“I am making sure, because I promised my dad I would take care of the church and cemetery as long as I was able,” Howell said.

To find out more:

For information on registering a cemetery on the Alabama Historic Cemetery Register, visit Preserveala.org.