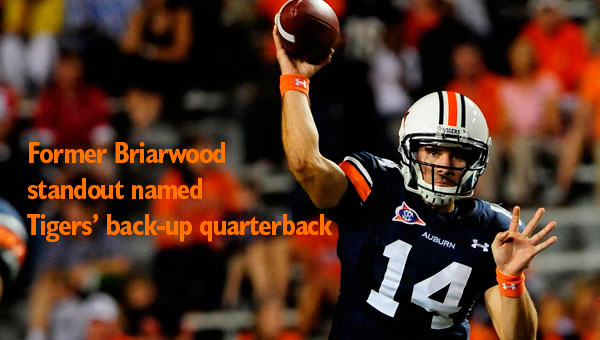 Barrett Trotter is right where he wants to be.

The former Briarwood Christian School star and third-year Auburn University quarterback was informed at the end of spring practice that highly-touted junior college transfer Cameron Newton would be getting the nod as the Tigers’ starting quarterback this season.

While Trotter was disappointed, the battle to back Newton up was far from over.

Trotter and the rest of his teammates reported for fall camp on Aug. 3 and began practice a day later. Trotter joined fifth-year senior Neil Caudle, a former Spain Park standout, and redshirt freshman Clint Moseley to compete for the back-up job.

Each drill, each practice and each day went by without answers. The coaches weren’t shedding any light on the situation. Each competitor kept pushing in hopes of becoming “the next guy.”

Finally, as the end of fall practice drew closer, offensive coordinator Gus Malzahn broke the news to Trotter that he would be serving as the team’s No. 2 quarterback heading into the season.

“Coach Malzahn told me before practice one day,” Trotter said. “It meant a lot to me. I was excited and glad. It was good to see rewards come from hard work.”

The leap on the depth chart didn’t come without some bumps in the road.

Trotter came to Auburn in 2008 after a heralded career at Briarwood. The 6-foot-2 signal caller, who threw for 3,469 yards and 47 touchdowns as a senior, etched his name at the top of several Alabama High School Athletic Association offensive record categories during his high school career.

The scholarship offers came from all over, but one school stuck out in Trotter’s mind.

Trotter turned down offers from schools such as UAB, Troy and Duke and signed with the Tigers on Feb. 6, 2008.

Following a redshirt freshman season and a coaching change – former defensive coordinator Gene Chizik was hired in December of the same year to replace Tommy Tuberville – Trotter returned to the practice field in the spring ready to make a name for himself with the new coaching staff.

Those hopes, however, were dashed with one play.

During a scrimmage inside Jordan-Hare Stadium in mid-April 2009 – the team’s last scrimmage before the A-Day spring game – Trotter suffered a knee injury.

“I was running the ball up the middle, and I made a cut,” Trotter recalled. “My knee went out. I tore my ACL.”

Suddenly, the time that was supposed to be used in practice and voluntary workouts in an attempt to prove himself to a new set of coaches would now be spent going through intense rehab sessions.

Trotter admitted the setback was tough.

“After the injury, I wasn’t able to do much,” he said.

Trotter did the necessary work to strengthen his knee, and while physical participation was out of the question, he took mental reps by sitting in on quarterback meetings, watching tape and studying the playbook.

By end of the year, Trotter said he was able to start engaging in football-related activities again.

He returned fully healthy last spring, and that’s when he showed the coaches what he could do.

“Spring practice was big for me,” Trotter said.

For now, Trotter will roam the sidelines and help signal in plays while knowing his number could be called at any time.

Trotter saw his first collegiate action in the Tigers’ 52-26 win over Arkansas State in the 2010 season opener Sept. 4. Trotter led Auburn on its final drive, which ran out the remaining 4:16 on the clock in six plays, and completed his only pass attempt to junior receiver Derek Winter for a 13-yard gain.

Trotter’s 13-yard completion gave the Tigers a first down and helped Auburn melt the clock late in the fourth quarter.

“I feel confident in (running the offense),” Trotter said. “One play, (Newton) could be playing great. The next play, he could be hurt. I’m just going to prepare myself to be ready.”

Newton will be gone in two years – or perhaps sooner – and another race to be Auburn’s starter will ensue.

“Until then,” Trotter said, “I’m going to be ready for anything.”

Members of the University of Alabama hockey team prepare for their upcoming season during a Sept. 8 practice at the... read more