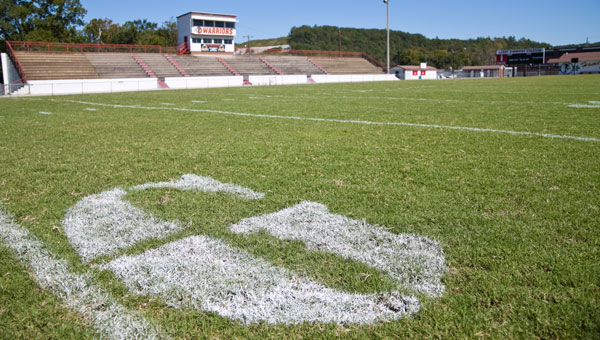 The Alabaster Sports and Entertainment Foundation is nearing its goal of bringing a turf field to the Thompson High School football stadium. (File Photo)

ASEF President Ched Burton said the organization has received a wave of support since new THS football coach Bruce Hill took over at the school, and has received donations from major corporate sponsors, local companies and area residents over the past few months.

“We are about three corporate sponsors away from reaching our goal right now,” Burton said. “We have one corporate contract signed right now, and three other agreements in principle.

“We should sign another contract really soon,” Burton said.

Coca-Cola signed on to support the program a few months ago, and ASEF volunteers have been working to sell concessions at the city parks to raise money for the stadium upgrades.

The first phase of the project will include a synthetic turf field, and the organization is close to raising enough money to fund the upgrade, Burton said.

“As it stands now, we hope to have a ground-breaking ceremony during the last home football game of the year,” Burton said. “The fundraising has been going a little bit slower than we anticipated, but we are getting there.

“Our goal was to have the team playing on a turf field this year,” Burton added. “But it is our hope that we will have it ready for soccer to play on in the spring.”

If ASEF raises enough money to fund the turf field by the end of the 2010 football season, it should have enough time to install it between the football and soccer seasons, Burton said.

“I talked with EnviroTurf, and they said, with good weather, it will probably take them about six weeks to install the field,” Burton said. “So if we don’t have an eight-to-10-week period to work with, I don’t think we will do it until after soccer season is over.

“We don’t want the soccer team to miss a beat,” Burton added.

A flood of donations and support came to ASEF soon after Hill took over at the school, Burton said.

“When coach Hill took over, I don’t even know if we had a commitment from a local sponsor yet,” Burton said. “Within a week of (Hill) starting, we had three commitments.

“We are really excited about the progress we’ve made,” Burton added. “We are getting close.”

To learn more about ASEF, or to donate to the project, visit ASEF.biz.