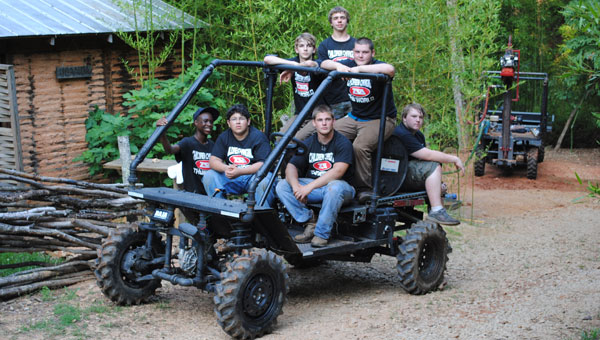 Calera High School students with one of the Basic Utility Vehicles they built in engineering class.

For the past four years, students in teacher Brian Copes’ engineering class have created BUVs from the ground up using sustainable and reusable parts. The students designed the vehicles to be shipped and easily assembled with simple hand tools in underdeveloped countries, Copes said.

The group has built several vehicles over the years, including a transport bus, an ambulance and a vehicle capable of drilling fresh water wells.

Until now, the group has only tested the vehicles in the U.S., winning first place in several high school and collegiate competitions. Now the group is making plans to deliver one of the vehicles to a needy country for the first time as a part of a full-length documentary.

Last year, Copes was contacted by MagnoliaLand Entertainment with the request to feature the students in a documentary film.

The film will be called “Children Changing the World” and will document every aspect of the BUV project, including building, shipping and assembly in a selected country, Copes said.

At the end of the documentary, the students will travel to the selected country to see their work in action, Copes said.

“My kids then will go to the county and show a group of teenagers there how to assemble it and use it,” he said.

Copes said the opportunity would be invaluable for the students who have worked hard on the vehicles over the last several years.

“This way the kids can get a real world experience,” he said. “Many of them haven’t spent much time out of the Southeast. This can open their eyes to the world around them. You can see things on National Geographic, but you can’t really experience it until you see it first hand.”

The students chose to name their fleet of BUVs “The Eagle.” The eagle is the school’s mascot, but also the nation’s symbol of freedom, Copes said.

“Our kids, through The Eagle unit, are offering the freedom of mobility and the freedom of economic growth with the use of these vehicles in other countries,” he said.

The documentary is currently in the preliminary stages, Copes said. The production company is raising funds for the project and Copes is seeking local sponsors and support. The documentary’s budget is $100,000.

“I’m the type of teacher who doesn’t sit back and let someone else do all the work,” he said.

There have been more than 180 business partners involved in the BUV project, offering technical support, parts or financial donations. Copes now hopes a local group or philanthropic organization will help fund the documentary and the students’ trip over seas.

The production company has put together a documentary trailer featuring the students to use in presenting the idea to possible financiers.

The video can be viewed at Youtube.com/watch?v=sNBVkokbMmk.

Benny Davis of Recycling Unlimited watches as contractors for the Alabama Department of Environmental Management work to clean up alleged... read more