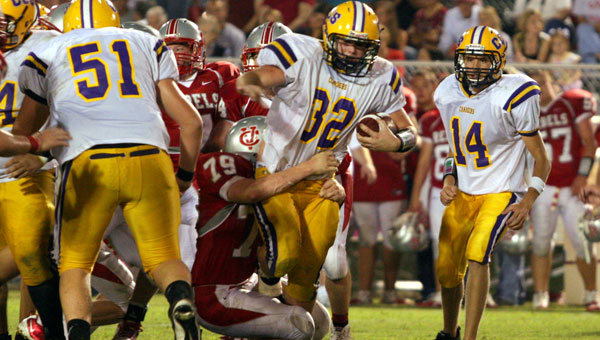 Cornerstone Christian School running back Clayton Halbert is brought down by Coosa Valley defensive lineman Matt Zettler in the Rebels 27-6 win over Cornerstone in a region battle Sept. 10. (Contributed/Cindy Wingard)

“We had to fight off adversity on and off the field,” said Coosa Valley coach Vince DiLorenzo. “The seniors did a great job of fighting through the adversity and we played hard for four quarters. We felt like it was an important game for a lot of reasons. Not only was it a big rivalry game, but it was also a big region game.”

Coosa Valley got on the scoreboard first following a 35-yard touchdown pass from John Bullen to Preston Parker. Cody Garrett added the extra point to give the Rebels a 7-0 lead with 11:03 remaining in the first half.

Tanner Wood reeled in a 7-yard touchdown pass from Bullen with 35 seconds remaining in the second quarter to push the lead to 13-0 at halftime.

Ryan Batson added to the lead with his 7-yard touchdown run in the third quarter, which pushed the Coosa Valley lead to 21-0 following his successful two-point conversion.

Bullen capped the scoring for the Rebels with his 36-yard touchdown reception from Hunter Rowe in the fourth quarter.

Clayton Halbert scored the final touchdown of the game on a 2-yard run with 6:36 left in the fourth quarter to put Cornerstone’s first points on the scoreboard.

Bullen completed 6-of-13 passes for 62 yards with a touchdown and an interception in the win. Rowe completed his only pass for 36 yards and a touchdown.

Parker, Bullen and Wood finished with one touchdown reception each.

Batson rushed for 94 yards and a touchdown on eight carries. Bullen added 56 yards on 14 attempts.