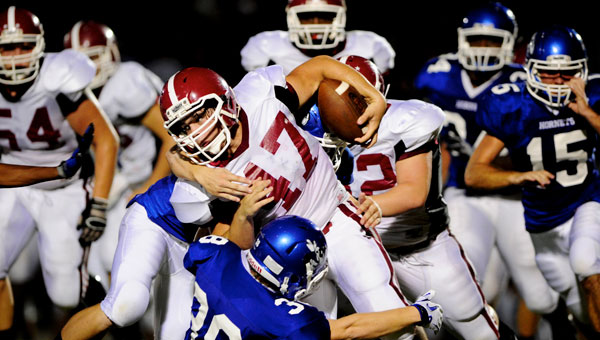 A host of Chelsea tacklers bring down Shelby County fullback Brent Wooley in the Hornets' 33-0 win over the Wildcats in a Class 5A, Region 5 battle Sept. 10. (Reporter Photo/Jon Goering)

CHELSEA — Chelsea High School football coach Wade Waldrop took one look at the Hornets’ Class 5A, Region 5 schedule this summer and had one lingering thought.

His team didn’t have a few weeks to get its feet wet — not with region games against Sylacauga, Shelby County and Briarwood Christian back-to-back-to-back.

Following a one-point win over Sylacauga last week, the Hornets earned a passing grade on their second test Sept. 10 after a 33-0 shut out win over the rival Wildcats in the Shelby County Reporter Game of the Week.

“When we saw the region schedule, we pretty much knew we had to be ready early on,” Waldrop said. “We’ve got two big wins in a row, but we can’t be flat against Briarwood.”

McCall rushed for 110 yards and two touchdowns on 14 carries. Washington added 58 yards and a score on 10 carries.

The Hornets wasted little time after a nine-play, 66-yard scoring drive, capped bya 1-yard touchdown run by McCall, following the opening kickoff to take a 6-0 lead with 8:25 remaining in the first quarter.

Chelsea added a second touchdown in the first quarter when Washington capped a four-play, 54-yard scoring drive with an 8-yard touchdown run with 4:14 left in the opening quarter. Travis Mitchell’s successful point-after attempt gave the Hornets a 13-0 lead.

The Hornets took a 20-0 lead into the locker room at halftime after Campbell reeled in a 13-yard pass from Ganus for his first touchdown in the game with 2:29 remaining in the first half. Ashley Page added the extra point.

Ganus, who was on the losing end of the rivalry game last season, said the 33-0 win over the Wildcats makes up for the loss in 2009.

“I’ve never felt better,” Ganus said. “It feels great to come out and beat your rival.”

The Wildcats were hurt by turnovers as they coughed up the ball three times and had a pass intercepted. Hunter Picklesimer of Chelsea capitalized on the Shelby County miscues as he recovered one of the fumbles and picked off a pass.

Shelby County made one last push in the fourth quarter with two drives inside the Hornets’ red zone before fumbles left the Wildcats without any points on the scoreboard.

Shelby County coach Ryan Herring said the Wildcats’ inexperience played a role in the loss. Herring praised the effort of quarterback Evan McNeal, who kept the Wildcats moving despite being banged up play-after-play.

“We’re just young,” Herring said. “We’ve got a long way to go. But we’ve got (McNeal) and he can play with anybody.”

By WESLEY HALLMAN / Sports Editor The Hoover City School Board has set a special-called meeting Thursday, Sept. 16 at... read more