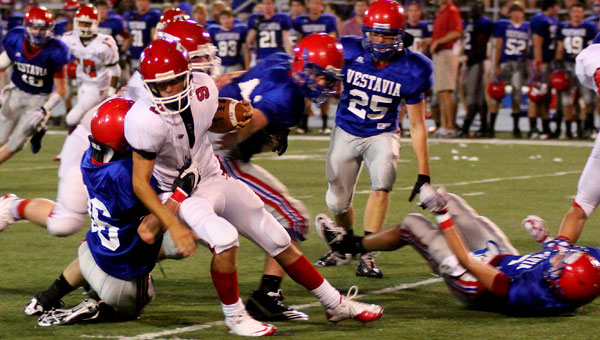 Thompson sophomore quarterback Trey Matherson is brought down by a Vestavia Hills defender in the Warriors' 28-13 loss to the Rebels in a Class 6A, Region 6 contest Sept. 10. (Contributed/Eric Starling)

VESTAVIA HILLS — Traveling to Vestavia to play their first road game of the season, the Thompson Warriors faced their toughest opponent yet this season and played strong for four quarters before falling 28-13.

Both teams traded possessions early, with Vestavia capitalizing on a fourth-down situation for the Warriors.  A high snap forced Thompson’s punter, Austin Sapp, to tuck the ball and run, giving the Rebels the ball at the Warriors’ 20-yard line.  Four plays later the Rebels would punch it in and take a 7-0 lead.

Two interceptions in the second quarter resulted in the Rebels putting an additional 14 points on the board within a three-minute span.  This would be the largest deficit that the Warriors had faced this season, and coming out in the second half they needed to make a statement with their first possession.

On the second play from scrimmage, Demarcus Threatt took the rock and rambled 73 yards to the Rebels’ 7-yard line to set up Thompson’s first score of the game.  Two plays later, Demetrius Alexander took the handoff from quarterback Jay Burton and punched it in from seven yards out.   A missed point-after attempt left the score 21-6.

The Rebels added another score early in the fourth quarter.

Thompson started its final possession at the Rebels’ 20-yard line after a strong defensive stand.  Quarterback Trey Matherson handed the ball to Threatt one more time and he made the Rebels pay.  Cutting around the end and getting to the edge, Threatt outran the secondary and then cut back inside to go the distance for the Warriors’ final score.  A Matt Nall extra point made it 28-13.

“Anytime we can get Demarcus outside on the edge, he has the speed to make big plays for us,”  said Thompson coach Bruce Hill.  “We just got beat by a better team tonight.  They have a strong program here at Vestavia and we are building a strong program after running off course.”

Sianna Nelson of Thompson High School captured first place in a meet with rival Pelham in the Warriors' first ever... read more