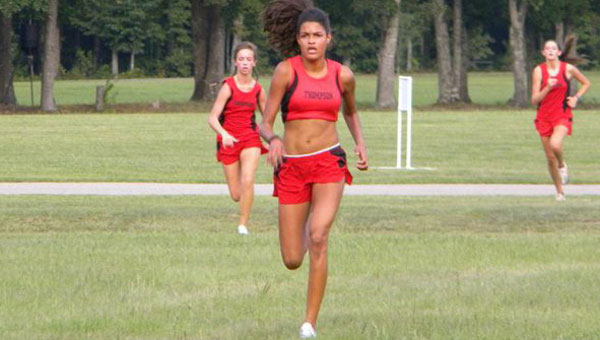 Sianna Nelson of Thompson High School captured first place in a meet with rival Pelham in the Warriors' first ever home meet Sept. 9 at Veterans Park in Alabaster. (Contributed)

The Warriors’ cross country teams competed against rival Pelham in their first home meet. Thompson won the girls’ meet, while the Pelham boys claimed first place in the boys’ meet.

Sianna Nelson led Thompson as she crossed the finish line first in the girls’ meet with a time of 17:18 in the 5K race.

Erin Landa of Pelham led the Panthers as she finished fourth with a time of 17:33.

Michael Johnson of Thompson led the Warriors as he finished second overall in the boys’ meet with a time of 15:16.

The Alabaster Sports and Entertainment Foundation is nearing its goal of bringing a turf field to the Thompson High School... read more