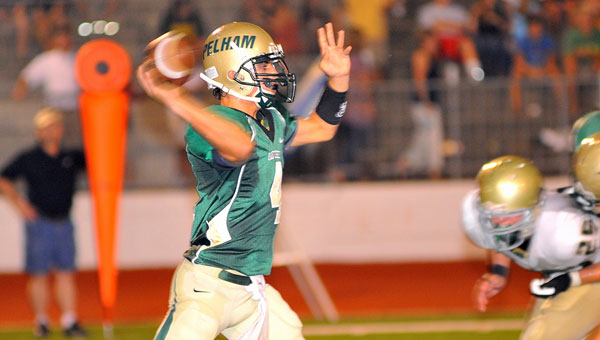 Miscues on offense and an inability to move the ball efficiently plagued the Pelham Panthers Sept. 10 in a 35-7 home loss to the Mountain Brook Spartans.

“We started out poorly, and that caused us to get down early,” Burnett said. “We just have to regroup and get back and play next week.”

Mountain Brook jumped on the scoreboard in its first drive of the game, when quarterback Edward Aldag found Gavin Golsan on a 24-yard pass in the end zone.

Mountain Brook scored again with 1:03 left in the first quarter after running back John Beck found the end zone following a 2-yard run.

Handrahan again added the extra point, putting the Spartans up 14-0.

The visiting team scored again early in the second quarter when Aldag connected with John McCrary on a 50-yard scoring pass.

Mountain Brook added to its lead late in the second quarter when Mark Rector broke free of defenders and ran 22 yards to score.

The third quarter saw no scores, as Pelham forced a fumble and benefited from a roughing-the-kicker penalty early in the second half.

However, Mountain Brook scored again early in the fourth quarter when McCrary caught a 42-yard pass from Aldag in the end zone.

Handrahan’s extra point gave the Spartans their final point of the game, bringing their lead to 35-0.

Following a pass interference call against Mountain Brook, Pelham’s M.J. Brown reeled in a 34-yard pass from Cato to score.

By DAVIS POTTER / Staff Writer Briarwood Christian School (3-0, 2-0 in Class 5A, Region 5) got yet another dominating... read more