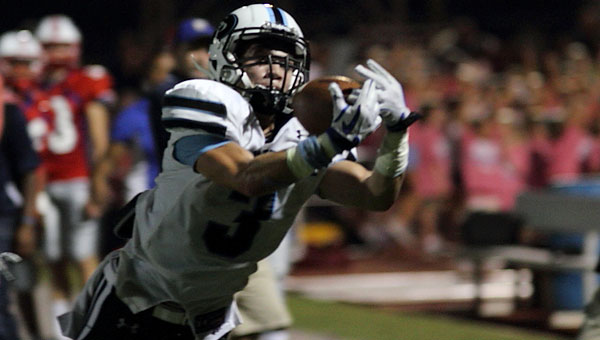 Spain Park wide receiver Zak Michael reels in a pass from Nick Mullens in the Jaguars' 36-35 overtime victory over Homewood in a Class 6A, Region 6 battle Sept. 10. (Contributed/Jimmy Mitchell)

The Spain Park High School football team defeated Homewood 36-35 in an overtime thriller in a Class 6A, Region 6 battle Sept. 10.

The win is the first victory for Jaguars’ interim coach Ben Berguson, who is coaching the team in place of suspended coach David Shores.

Steven Silvio scored on a 2-yard run in the first quarter to give the Jaguars a 13-7 lead.

Zak Michael reeled in a 20-yard touchdown pass from Nick Mullens and Hoffman added a 42-yard field goal in the second quarter to push the Spain Park lead to 23-7 at halftime.

Homewood responded with three touchdowns in the second half. Hoffman added a 43-yard field goal in the third quarter and a 28-yard field goal with less than two minutes remaining to send the game into overtime.

Kevron McMillan scored on a 5-yard run and Hoffman added the extra point to put the Jaguars ahead 36-29 after their first overtime possession.

Homewood scored a touchdown and went for the two-point conversion, but defensive back Jamel Cook broke up the pass play to seal the Spain Park victory.