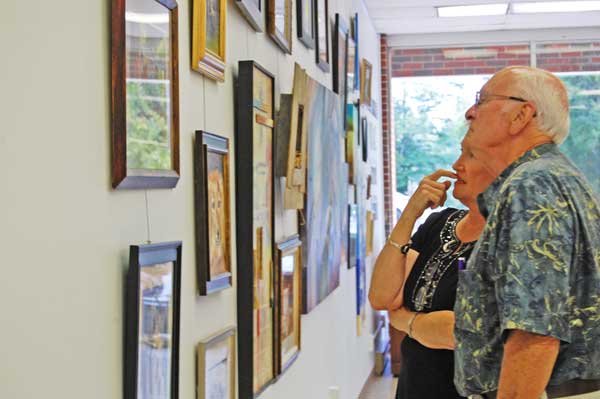 COLUMBIANA – Strips of texture and radiant hues captured the view of visitors to the Shelby County Arts Council Sept. 9 with the display of the Council’s second-annual Juried Art Show.

“There are some pieces included that just amazed me with the artists’ creativity,” said Arts and Education Director Susan Dennis. “Pieces would come in and I was like, ‘Wow, I never would have thought to do this.’”

Judge Arthur Price selected 68 pieces of artwork for the show.

“As a working artist, I was so pleased to see such a wide variety of creativity and skill from this lovely community,” Price said. “It was difficult to leave anyone out as it was clear the works submitted to this show were heartfelt and beautifully done.”

Price’s own work focuses on large-scale canvas paintings. Arts Council Founder Terri Sullivan said she selected Price not only because he is a Shelby County resident, but because he also holds great credibility in the art world. 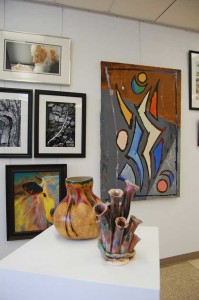 “I think having him as a judge actually drew a lot of artists to the show. They wanted for him to evaluate their work because his is so well–respected,” Sullivan said.

She said Price is also a genuine and humble person – qualities that make him uniquely qualified to scrutinize artists who have worked for decades in their respective mediums.

“We were really drawn to him as a juror because he’s one of us, he’s an artist himself,” Dennis said. “I think he is able to be objective about this from his own perspective.”

Artists included in the show range from college students to council instructors and retired members of the community. Price said events such as these are crucial to the health of society.

“It is essential for artists to have an outlet for their works to be seen,” he said. “All communities thrive where the arts abound.”

Tamara Crutchley, a researcher by trade, began painting for the first time after her father died and she went through a divorce.

“I moved into my new apartment and felt compelled to paint,” Crutchley said. “Every time I’m not at work, I’m painting. It just makes me happy.”

Joy emits from Crutchley’s work through vivacious color and a nod to religious art. Her work received honorable mention in acrylics and was also featured on the postcard for the show. 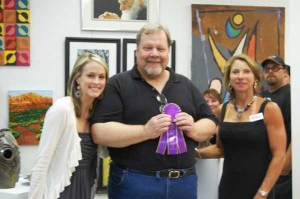 Artwork from the show will remain on display through September, after which it moves to the Comer Museum of Sylacauga for the month of October.