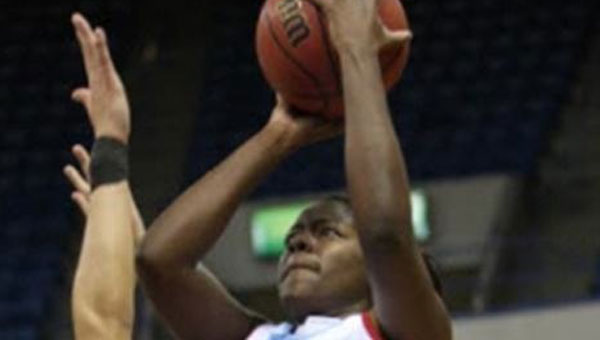 “Some people want it to happen, some wish it would happen, others make it happen.”

Her grandmother, sitting in the cheering crowd, cries out, “Bean! Pass it to Cortney.”

The year is 2000. Calera Bulls is the team, coached by Dowdell’s uncle, Gregory Haynes.

Grandmother Georgia Hall, her biggest fan, did not like the name Shanavia’s parents, Aretha and Andrew Dowdell, gave her. She thought the name sounded like navy bean, thus her nickname Bean.

In the heart of that 12-year-old girl was a dream. Inspired by Michael Jordan, who played several sports, Dowdell knew if she worked hard at one sport she could do whatever she wanted, which was to play professional basketball.

“My uncles, Gregory Haynes and Isaac Hall, and Cortney pushed me to excel,” Dowdell said. “My cousin Cortney Haynes and I played basketball almost every day.”

She started playing varsity basketball in seventh grade under Scott Gifford. James Knowles and Angie Kitchens were her high school coaches. She credits them for getting scouts to the games, which ultimately got her a full scholarship to Louisiana Tech.

Taking her team number, 42, to play forward for the Lady Techsters, she trained under Coach Chris Young. Intimidated by older players, she said she made a lot of “stupid mistakes.”

Dowdell’s junior year, Teresa Weatherspoon, a.k.a. Coach Spoon, began to push her beyond her limit. “She showed me how to not give in to fatigue, to keep my stamina up, taught me never say can’t,” Dowdell said.

Dowdell was selected by the Washington Mystics during the WNBA draft this year. Though she did not make the team, she was not disappointed.

“Just being selected by the Mystics was my dream come true. I knew it was not the end, but the beginning in a different direction.”

Her agent, Eric Weisel, looked at overseas teams. After evaluating the pros and cons, they chose Toulouse Metropole Basket.

Dowdell boarded a plane for France Sept. 7, leaving these words for aspiring athletes — wise words from Weatherspoon: “Don’t give up. You may not be the best on the team, but keep this one thing in mind at all times in the game: The opposing team has your mama’s purse and in that purse is your allowance and you don’t want them to take it.”

Thank you, Shanavia, for modeling excellence to our youth! We wish you success in all your endeavors.

In a surprise reception for Calera High School administration and faculty, Randy Fuller praised their efforts in achieving the highest... read more