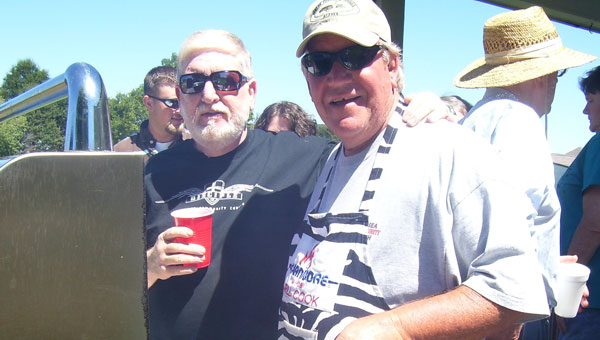 Rusty Schoenfeld, left, and Ben King grilled 160 hamburgers and 160 hotdogs for a Labor Day picnic at Lay Lake in Wilsonville.

The home and yards of Jeremy and Rebecca Newman’s home on the backwater of Lay Lake in Wilsonville were lively places on the Sunday afternoon before Labor Day as about 200 people from a Chelsea church celebrated the holiday.

Children and sometimes an adult or two splashed into the water flowing through giant inflatable water slides. On the green lawn, which slopes slightly to the water’s edge, people of varying ages played volleyball, while others watched activities from lawn chairs or seats on the grass.

Nearer the house and filling the patio and deck were people at tables shaded by two large tents, eating food from the grill, sampling each other’s potato salad, beans, okra and other veggies, along with desserts from banana pudding to chocolate pie to spice cake.

Ben King grilled more than 160 hamburgers and 160 hotdogs, which were all eaten.

Meanwhile, on the hillside above the house, a guitar and a mandolin played. On the bank of the lake, people fished or stood talking and enjoying the sun while waiting to ride in one of the pontoon boats that lined the waterway to the Newman boathouse. In the water itself, people swam while the lake was dotted with pontoon boats, a canoe and other smaller craft.

Rebecca Newman termed the event “just wonderful.” She was amazed, she said, that you could have that many people over and everything would be left so clean, even neater than when they came. “It just blows my mind.”

The group was made up of people from Chelsea Community Church, their friends, family members and visitors from the community.

Pastor Greg Davis said he could take no credit for the event.

“The church people did it all,” he said. He added that this is the way the church is supposed to work. The pastor is there to teach the flock how to minister to one another and others, he said, and that’s just what the people at CCC, or “the C’s,” do.

This was the second year that Rebecca and Jeremy Newman hosted the church’s annual Labor Day Picnic at their home.