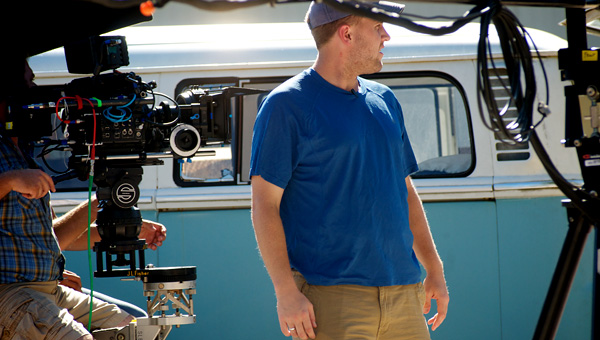 ALABASTER — Shelby County’s local movie-making brothers are hard at work on the production of their first feature film, “October Baby.”

Jon and Andy Erwin, of Erwin Brothers Motion Pictures out of Calera, have been filming around the county including Alabaster Sept. 13.

Scenes have been shot in Helena, the Birmingham airport, St. Paul’s cathedral in downtown Birmingham and Mobile.

The film’s co-producer, Dan Atchison of Helena, said the crew has been doubling up on scene locations. Alabaster’s Barron Fan Technologies acted as the set for both a scene at a mechanic’s shop and a scene that takes place in a junkyard.

“It keeps us from driving all over town,” he said. “It saves time, it saves money. It’s all smoke and mirrors.”

It’s no accident that the brothers chose to film in their home state, Atchison said. Keeping the film local was intentional.

“We wanted to shoot our first feature film here,” he said. “Alabama is a beautiful state. We hope to attract more films here. It’s good for the economy, it’s really good for our state.” 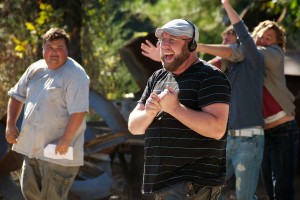 Andy Erwin, laughs on the set of "October Baby," which is being filmed at various locations around Shelby County.

Thanks to the Alabama film incentives that were approved in July, the company will receive a 25 percent rebate on production expenses over $500,000.

It gives the film a 25 percent larger budget and it keeps jobs and money in the state, Atchison said.

Much of the crew and cast are also from Alabama, including the film’s lead actress, Rachel Hendrix. Other familiar cast names include Chris Sligh, Nashville-based American Idol contestant and John Schneider from the TV show, “Smallville” and the original “Dukes of Hazzard.”

The movie follows the story of a college-aged girl who finds out she’s adopted and searches out her birth mother. It’s a coming-of-age story about recovering from a painful past and finding forgiveness, Atchison said.

“We hope it will cause people to think about the relationships in their lives,” he said. “But it will entertain first and foremost.”

Filming will continue until Sept. 19 in several locations around Birmingham. The area is the perfect place for filming because of the diversity between big city, country and old small towns, Atchison said.

“Birmingham really plays anytown U.S.A., you can make it anywhere,” he said. “ It’s a great place to shoot.”

The crew will be filming the movie’s opening scene from 5-10 p.m., Thursday Sept. 16 at the Alabama Theatre. Atchison said they need as many willing participants as possible to play extras in the movie.

“Thursday night we need as many people as we can get,” he said “ We need to fill the theater. If the public wants to help, just show up, dress like you would for a wedding. This is the opening scene to the movie so it’s very important.”

The film will be in post-production for at least three months before touring at festivals, Atchison said. The goal is for a big distributor to pick it up and put the film in theaters spring of 2012.

If they meet that goal, the company would like to premiere the film like they produced it — locally, Atchison said.

Carole and Nickey Rudd of Chelsea view a wall covered with work from local artists during the Shelby County Arts... read more