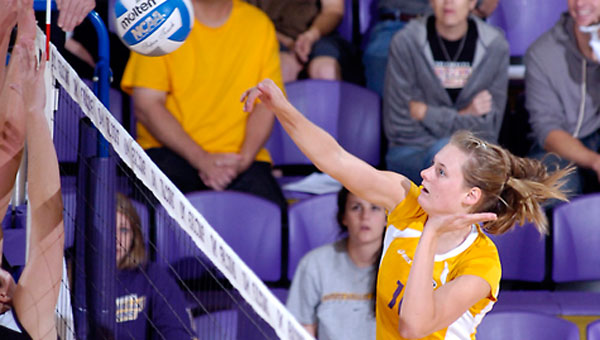 Taylor Chapman finished with 15 kills in the victory. Virginia Clay chipped in 11 kills and five blocks.

Manyi Ati led the Falcons with nine kills in the win over Erskine.

Garrison finished with 38 assists and Wilson recorded a team-high 18 digs.

Clay led the Falcons with 12 kills in the win over Concord. Ati and Dowd added nine kills each.

Garrison finished with 42 assists, while Wilson and Dowd tied for the team-lead with 17 digs each.

The University of Montevallo men’s soccer team picked up a 4-0 win over Newberry College and a 2-0 win over Flagler College last week to improve its record to 4-0 to begin the 2010 season, its first under new coach Ken Hassler.

Austin McIntosh, Nathaniel Foster, Milan Pualic and O’Neill recorded an assist each for the Falcons, who are ranked No. 23 in the latest National Soccer Coaches Association of America poll.

Brendan Ledgeway, who was named the Peach Belt Conference’s Goalkeeper of the Week, recorded one save in the win.

Foster scored two goals in the Falcons’ 2-0 win Sept. 11 over No. 8 Flagler College.

James Steer and Pualic recorded an assist each for Montevallo, which improved to 1-0 in PBC action. Ledgeway recorded four saves and posted his second shutout of the season.

Paige Scott scored the only goal in the Falcons’ 3-1 loss Sept. 11 to Flagler.

The Montevallo women, who began the season ranked No. 10 in the U.S. Track and Field and Cross Country Coaches Association’s preseason Southeast region poll, finished second in the team standings.

The Falcons were led by freshman In-Mi Matsunaga, who came in third overall with her time of 20:27.20.

The Montevallo men, reinstated in intercollegiate athletics for the first season since 1966, finished fourth in the team standings in the Remembrance Race.

The Falcons were led by Mark McDonald, who finished 10th overall with his time of 29:43.10.