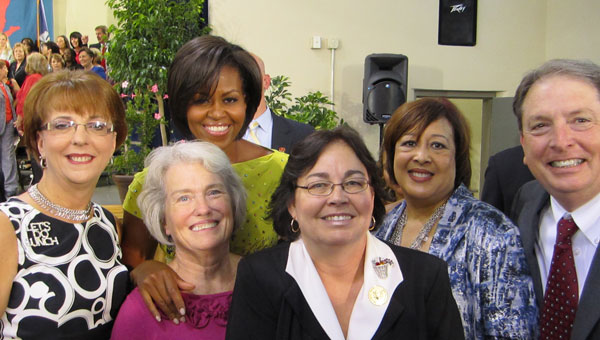 For Maureen Alexander and other Shelby County Schools officials, the chance to meet First Lady Michelle Obama came out of nowhere.

“It all happened pretty quickly,” said Alexander, the child nutrition program coordinator for the school system. “It was really exciting.”

Obama made the visit to Brock Elementary Sept. 8 to promote her “Let’s Move!” campaign against childhood obesity.

Brock Elementary School is part of the St. Tammany Parish school district, which has been recognized for having 25 schools earn the Gold Award of Distinction through the HealthierUS School Challenge program of the United States Department of Agriculture.

“We didn’t have much time because that was before Labor Day, and between Thursday and Monday we had to get everything squared away,” Alexander said.

“The first lady did mention us in her remarks,” Alexander said. “After she gave her remarks, she came down and was just very, very gracious. She just grabbed my arm and said, ‘Oh, I’m so glad you all came.’ She thanked us for all we’ve been doing.”

Alexander said Obama is sending a formal letter with her personal signature to every principal of the 20 Shelby County schools honored through the program.

Alexander said the honors just keep coming for the child nutrition program, even though school officials are only trying to fulfill their duty to the students.

The school system has a central wellness policy, as well as wellness coordinators at each school. There is also a core menu implemented in every school, and a nutritional database to provide analysis of each meal served. The database is linked to the Shelby County Schools website.

“It took time to get our act together, so to speak, but we had no idea when it was all said and done we were going to be some of the first nationally,” Alexander said. “We were just going about our business and doing what we felt like we should do. We had no idea we were kind of leading the pack.”