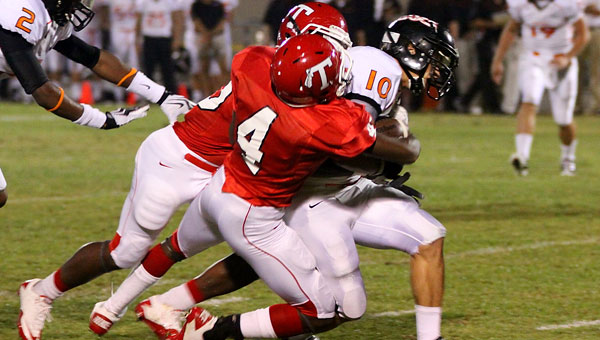 ALABASTER — The undefeated Hoover High School football team rolled in to Larry Simmons Stadium in Alabaster to face the Thompson Warriors after not allowing an opponent to score a touchdown or field goal all season.

That scoreless streak continued as the Bucs put up 50 unanswered points to defeat the Warriors 50-0.

The Warriors changed things up this week, throwing out some new formations on offense, but the speed of the Hoover defense adjusted and caused problems early.

“They have a big, strong team, and they kept us from getting to the edge,” said Thompson coach Bruce Hill.

“We need to get to the edge to make plays and they just shut us down tonight.”

In the second quarter, the Warriors pulled out a little trickery when punter Austin Sapp took the snap on fourth-and-6 and went around left end to gain 21 yards and a Thompson first down.

The drive ended when the Warriors fumbled on the Hoover 36-yard line.   The drive was Thompson’s deepest penetration into Hoover territory all night.

“We started the season telling our kids that we would be going through some fog early on, and you must continue to build faith in (the team),” said Hill.

“This was a faith building game, but we have the wipers on and we see the fog clearing as we continue to build.”