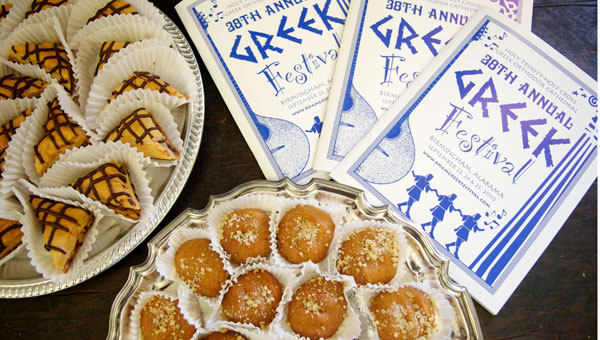 Twisting dough, powdering cookies and preparing pastries are just a few of the things on several Shelby County families’ to-do lists this week as they prepare for the 38th annual Greek Food Festival.

Members of the Holy Trinity Holy Cross Greek Orthodox Cathedral in Birmingham are working hard to prepare food for the festival taking place at the church from 10:30 a.m. – 10 p.m. Sept. 23-25.

Jimmy Cosmas, this year’s festival chairperson, is from the Inverness area and said each year it takes around 100 volunteers to make a successful festival.

During the three days, the church feeds about 25,000 people, Cosmas said. It requires a lot of help cooking and baking to prepare all the food.

Helen McCune, from the Chelsea area, has worked alongside other volunteer church members who have already baked 4,500 kourambethes, or white powdered sugar cookies, and 12,000 koulourakia, or butter coffee twist cookies.

“I love being able to share our ethnic cuisine with people that have never had it before,” she said. “They usually love it, they keep coming back. People can get a little taste of Greece just by coming downtown.”

Other popular food items served at the festival include pastichio, which is a kind of Greek lasagna, baked Greek chicken and gyro sandwiches.

Jimmy Dikis, from Columbiana, has worked the gyro stand at the festival for 26 years. His cousin volunteered him to do it when he was in his 20s, and now he’s the chairperson for the gyros every year.

“We’re a very close-knit community. We’re like family,” Dikis said. “My grandparents and great-grandparents came from Greece. We watched our parents work the festival, now we work there and our kids come in from college to work. It’s a generation thing.

“When you grow up in the church, it becomes part of you,” he added. “You can’t go somewhere else and find what we’ve got.”

During the festival, the church will also be providing tours of the cathedral, which has been in downtown Birmingham for more than 100 years, Cosmas said. Tour guides will explain the history of the religion and the traditions that are still practiced today.

“So many times people forget that part,” Dikis said. “We want people to come and see what we have. People always say, ‘You Greeks can really cook!’ but we want them to see our religion, too.”

Admission to the festival is free, including music, dancing and entertainment. Each food item will be individually priced, with a portion of the proceeds going to local charities.

With take out order forms and a drive-through option, the festival has become popular among the downtown crowd as well as food-lovers from surrounding areas.

“I think it’s the food and the fact that everybody who works here is just so happy to serve everyone,” Dikis said. “We’re just happy to have everyone here to share with. We’re sharing what we have — food, religion and tradition.”

For more information on the Greek Food Festival, call 716-3088 or visit Birminghamgreekfestival.net.