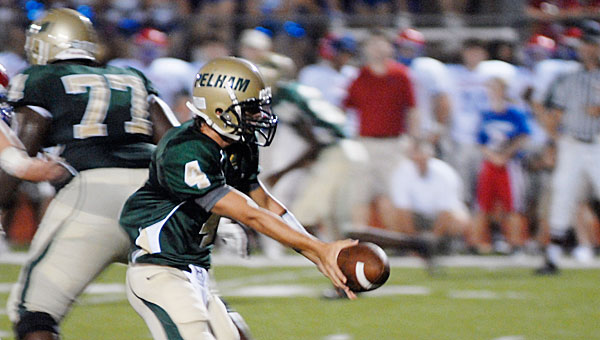 PELHAM — Despite a fourth-quarter offensive explosion, the Pelham Panthers were unable to come away with a homecoming victory Sept. 17, falling 38-23 to the visiting Vestavia Hills Rebels.

“Tonight was definitely an improvement over last week,” Pelham head coach Brett Burnett said. “We just have to continue to work hard and improve every week.

“Tonight was definitely a step in the right direction,” Burnett added.

The Rebels quickly drove down the field on the opening possession of the game, scoring on a 1-yard touchdown run by Stuart Jacobs.

But Pelham quickly answered on its next drive, putting three points on the board with a 22-yard Cameron Haynes field goal.

Vestavia’s Georgie Salem returned the ensuing kickoff 93 yards to add another six points to the board. Raspino’s extra point put the Rebels up 14-3.

The Panthers again answered on the next drive, when running back Dominique Harris broke free for an 88-yard scoring run. Haynes’ extra point cut Vestavia’s lead to 14-10.

But the Rebels widened their lead in the second quarter, when Salem ran 44 yards to score on a fourth-and-1 conversion. Raspino’s point after gave Vestavia a 21-10 lead.

The visiting team scored twice more in the second quarter on a 63-yard Salem run and a 35-yard reception by Neil Gannaway. Raspino’s extra points brought the game to 35-10 at the half.

Vestavia scored again in the third quarter on a 30-yard Raspino field goal.

But Pelham began to mount a comeback attempt in the fourth quarter, when M.J. Brown reeled in a 25-yard pass from quarterback Gray Cato. Haynes’ extra point brought the game to 38-17.

After recovering an on-side kick, Pelham again scored on the final play of the game, when Reed Bright caught a 23-yard pass from Cato in the end zone, bringing the final score to 38-23.