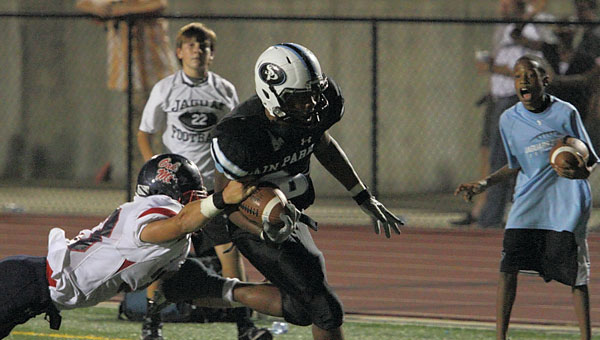 Spain Park running back Kevron McMillan breaks away from an Oak Mountain defender in the Jaguars' 21-7 win Sept. 17 over Oak Mountain. (Contributed/Jimmy Mitchell)

Berguson, however, saw his defense go to an entirely different level in his team’s victory on Sept. 17.

“Our defense won the game for us tonight,” Berguson said.

“I knew all week this would probably be a four-quarter game,” Berguson said. “I knew (Oak Mountain) would come over here and play with a lot of emotion because this is our biggest rivalry.”

Spain Park quarterback Nick Mullens managed the offense, hitting on 18 of his 29 pass attempts for 213 yards.

But this night was all about the defense for the home team.

The Jaguar defense — even with the absence of injured senior linebacker and captain Alex Payne — silenced Oak Mountain’s attack, surrendering just 135 yards of total offense to the Eagles and giving up only five first downs.

The Eagles, however, were able to solve the Jaguar defense for the first score of the night with some help from the opponent.

With Oak Mountain facing a third-and-14 from its own 35-yard line on its first possession of the game, quarterback Heath Quinn heaved a pass deep over the middle that fell incomplete.

A Spain Park defender was flagged for pass interference on the play, putting the ball at midfield and extending the drive for the Eagles.

The Eagles’ offense made the Jaguars pay on the very next play, as Quinn hit wide receiver Rico Dunn behind the defense for a 50-yard catch-and-run to put Oak Mountain on top, 7-0, with 9:33 left to play in the first quarter.

The Jaguars got the equalizer with 4:48 remaining before halftime when sophomore tailback Kevron McMillan rushed for a 13-yard score. McMillan’s touchdown capped a 7-play, 68-yard drive.

Jake Hoffman added the extra point to send the teams to the locker room tied at 7.

Spain Park took the lead for good with an 8-play, 50-yard scoring drive with 5:02 remaining in the third quarter. Fullback Steven Silvio finished the drive off with a 1-yard touchdown plunge.

After trading punts for the majority of the final quarter, Oak Mountain regained possession at its 40-yard line with one of its final chances to drive for the game-tying touchdown.

On the first play of the drive, Quinn fired a pass that was tipped by an Oak Mountain receiver. Instead of falling innocently to the ground, the ball fell into the waiting arms of Spain Park defensive back Chris Humes, who returned the interception to the Eagles’ 35-yard line.

The Jaguars then leaned on the legs of McMillan to put the Eagles away.

McMillan got four consecutive carries and reached the end zone on the final one, which was anything but easy.

McMillan looked to be bottled up near the line of scrimmage, but the sophomore ripped out of numerous arm tackles and raced down the left sideline for a 21-yard touchdown scamper with 5:20 to play to give Spain Park a two-touchdown lead at 21-7.

McMillan finished the night with 101 yards on 20 carries and two touchdowns.

Berguson praised his young tailback for rising to the occasion.

“Kevron’s been huge for us, and the sophomore is stepping up,” Berguson said.

The loss still has Oak Mountain looking for its first win of the season, and coach Jeff Harris said his team isn’t doing itself any favors.

“We’ve got to eliminate the mistakes that shoot ourselves in the foot,” Harris said. “I can’t remember how many penalties that just put us in a hole, and there’s not too many plays for second-and-15. We’ve just got to cut that stuff out.”

Spain Park will look to run its winning streak to three games Sept. 24 against Bob Jones while Oak Mountain will try for its first win when it hosts Northridge on the same date.

FROM STAFF REPORTS The Kingwood Christian School football team picked up its third win of the season following a 28-6... read more