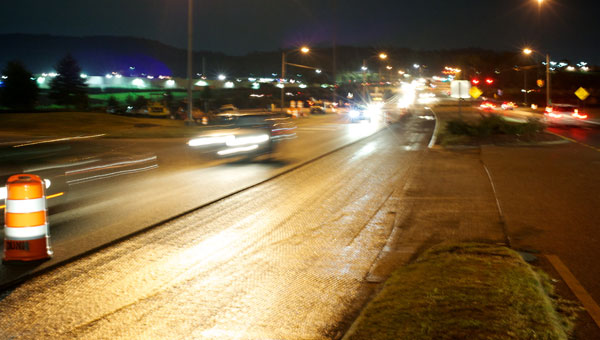 Alabama Department of Transportation crews have been working to resurface U.S. 31 in Alabaster for the past week. The crews likely will complete the project in early November. (Reporter photo/Jon Goering)

Late-night drivers on U.S. 31 in Alabaster may face some delays over the next several weeks, as Alabama Department of Transportation crews will be resurfacing the road through the heart of the city.

ALDOT began repaving the road Sept. 19, and will work on sections of the highway every Sunday-Thursday night between 7 p.m.-6 a.m.

When the project is finished, U.S. 31 will be repaved from Shelby County 68 to the Colonial Promenade exit of Interstate 65.

“They are paving almost all the way through the city,” said Alabaster Mayor David Frings. “They didn’t give us an exact end date, but they did tell us it’s going to be a multi-month project.

“But when it’s done, we will have a fresh new highway, which is always a good thing,” he added.

By paving only at night and clearing the road by 6 a.m. every day, the construction will have a minimal impact on rush-hour traffic, Frings said.

“That will help things a lot,” Frings said with a laugh.

However, those driving on U.S. 31 between 7 p.m.-6 a.m. likely will face lane closures and delays as they travel through the city.

Helena Fire Explorers member Andy Driver gets attended to by a Mountain Brook Fire and Rescue team during a training... read more