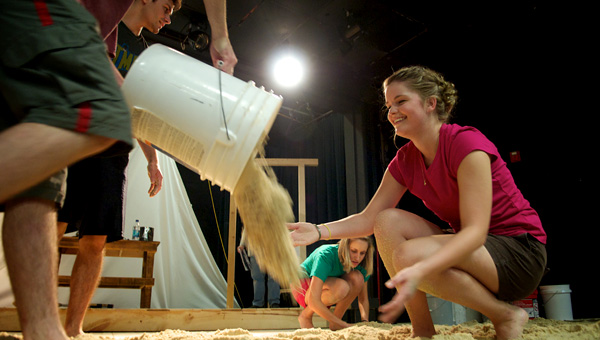 University of Montevallo theater students fill the stage with sand in preparation for the play "To Gillian on her 37th Birthday" on Sept. 20.

MONTEVALLO — The University of Montevallo’s first play of the theater season will be a little more realistic thanks to the 30 student volunteers who hauled 3,000 pounds of sand onto the stage Sept. 20.

The sand sets the scene for “To Gillian on Her 37th Birthday” set to open Oct. 7, which takes place on the beach in Martha’s Vineyard, said David Callaghan, associate professor and director of the play.

The sand was purchased by the department and brought in with two scoops of a backhoe. The student volunteers formed an assembly line and used buckets to haul the sand from the outside of the building onto the Reynolds Theatre stage. 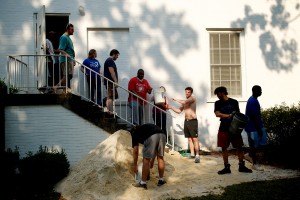 UM theater students form a line outside of Reynolds Hall into the theater to pass buckets of sand up to the stage.

This is the first time the college has used real sand to create a beach on the stage, Callaghan said.

“It’s a big environment issue for the audience,” he said. “It puts you in the world of the piece. And the actors don’t have to fake it.”

Sarah Larson, UM sophomore, is a theater technician for the play and said she has worked on the set of many plays.

“I’ve never had to haul in buckers of sand,” she said. “This is the most realistic floor I’ve ever seen in a play.

“It will make the show more believable to the audience,” she added. “It will take a while for the actors to get used it to. It’s totally different walking on sand.”

The volunteers completed the job in under an hour and can now resume practice with their new life-like set.

Callaghan said the play follows the struggle of a husband grieving the loss of his wife, Gillian, who died in a boating accident. The set will feature the beach house where he comes to cope on Gillian’s birthday and the anniversary of her death.

“It’s a play about coping with loss and moving on with life,” Callaghan said. “By the end of the play, all the characters are beginning to heal.”

The play was popularized by the film version that came out in the 1980s featuring Michelle Pfeiffer, Callaghan said.

Alabama Department of Transportation crews have been working to resurface U.S. 31 in Alabaster for the past week. The crews... read more