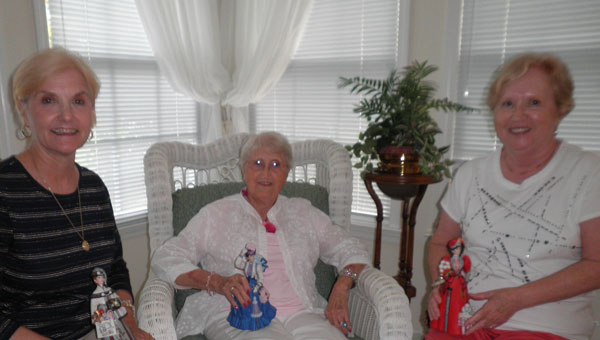 Virginia Poe grew up on a farm in the Kingdom with her parents and five siblings. Her blind grandfather and sickly grandmother lived across the road.

Poe was very close to her grandmother, who taught her to sew and to read from a primer. Poe said she was “the dependable daughter” and stayed nights with her grandparents to be able to run home if help was needed. She was 6 years old.

Her uncle owned a cafe in Columbiana where her sister worked. She introduced Poe to customer Woodrow Wilson Minor.

Virginia and Wilson married in 1942, moved to Center Street in Columbiana and had two daughters, Marie and Maureen. Wilson worked for the Shelby County Road Department.

“If a road was built in Shelby County, Wilson built it,” said Minor. “He could run a bulldozer like no one else.”

To earn extra money for the family, Minor sewed and found her love selling Avon.

In the late 1940s, she became an Avon Lady and was given the routes of the Kingdom, Shelby, Chelsea, Four Mile and Columbiana.

She soon became a legend in the Avon family, becoming the number one salesperson in the southern states of Alabama, Georgia, Florida and Mississippi.

Minor was a member of the President’s Club and received many coveted “Miss Albee’s,” awards given for excellent salesmanship. Her home is filled with awards she received, including a television, washer, dryer, stove and refrigerator.

Minor also received trips as awards to the Bicentennial in New York, the Greenbrier, Opryland and a Mississippi River Boat Cruise.

“I love the product, the people and my job,” said Minor. “I tried to do my best, to please the people, not to be number one.”

“Mother was so successful because she not only sold Avon but was a counselor, a good listener and prayed with her customers,” said daughter Marie. “She never judged people and was color blind. She was trustworthy and has kept secrets to this day.”

Minor retired after 57 years when her body no longer allowed her to work.

One of her dearest friends and best customers, educator Dr. Jesse Butler Jones, wrote a poem in 1992 called “My Avon Calling Lady.”

“Her life is a model,

We women would do well to imitate.

Both privately and publically,

For the good deeds,