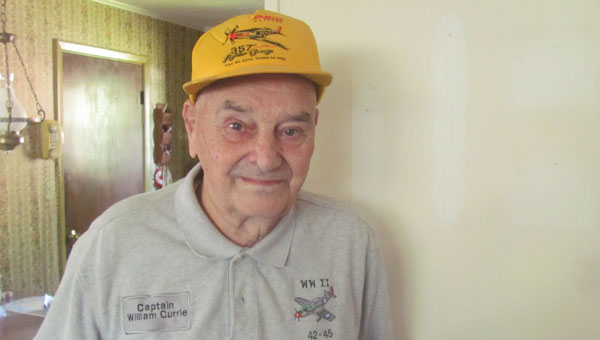 Alabaster’s Bill Currie has a rich military history and a love for flying.

In 1941, Bill Currie worked 70 hours per week for $10 in a hardware store. A native of Baldwinsville, N.Y., outside Syracuse, he was a 1938 high school graduate and had lived through the Great Depression.

Currie was a pretty happy fellow just to have a job in that time.

In September 1941, one of Currie’s buddies talked Currie into driving to Syracuse each week for schooling. They were being evaluated for a future with the Air Force.

Currie found out he had been accepted on Jan. 14, 1942, and had a one-day notice to report to Maxwell Air Force Base in Montgomery.

He traded his camera for a wristwatch and bought himself a Schick razor.

After taking the train from Syracuse to Maxwell AFB, he was exhausted. After a couple of hours sleep on a cot in “tent city,” he was off to the showers, the issuing of uniforms and then finding a place to stay.

Most of the barracks were full and he was placed in the aviation cadets’ barracks and signed up in a nine-month curriculum for pilots.

Currie went to Camden, S.C., to Primary Flight School. There, he flew a P-17 bi-plane. From Sumter, S.C., he went to Moultrie, Ga., and became a second lieutenant as a pilot of a single engine plane, then to Marianna, Fla., as an instructor in flight school.

After that it was back to Maxwell then to Eglin for Gunnery School, on to Ft. Myers, Fla., and then to Tallahassee, Fla. Finally, Currie and some of his buddies took the Queen Mary to Scotland, then on to England and war.

Currie was in the 357th Fighter Group, 363rd Squadron, flew 32 missions and was never shot down. His nickname was “Tailend Charlie.”

Currie’s plane was #B6X and the later famous Chuck Yeager flew #B6Y. These planes were P51 Mustangs — a one-man show equipped with a parachute, g-suit, oxygen mask, microphone and a .45 pistol.

During his time in Marianna, Currie had his appendix removed. One of his nurses was Martha Lanis from the Centerville, Ala., area. For 65 years of marriage, she has followed Currie all over the place. Buy a car — recondition — sell, buy a plane — recondition — sell or create a charter service to make extra money for all of his other endeavors. He flew a few well-heeled people from New York to Seattle for the World Fair.

Currie ran a hardware store in New Berlin, N.Y., for 25 years. Martha held the fort many, many times there. He was also in construction as a union carpenter for 17 years.

In 1979, Currie closed down the hardware store and came to Enterprise, Ala., to be near family. Then, in 1998, Calera became home.

Just last year, the Curries bought a home in Alabaster. Mrs. Martha is kind of “house bound” but Bill, who is now in his 90s, is still “raring to go.”

The Curries have one son, two grandchildren, one great grandson and another on the way.