VANDIVER — Sheriff’s deputies arrested a man who barricaded himself in a Vandiver home with a weapon Sept. 19.

Jerusalem Festes Grimes, 42, of Vincent, has been charged with terrorist threats and criminal mischief. 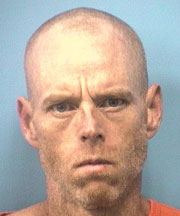 At about 4:40 a.m. Sept. 19, the Sheriff’s Department got a call reporting a person with a weapon at a residence in the 300 block of Shelby County 50 in Vandiver.

Deputies responding to the call saw Grimes with a weapon outside the home. He went inside the residence, at which point deputies began establishing a secure perimeter around the home. Deputies also attempted to talk with Grimes.

The Shelby County Sheriff’s Tactical Response Unit and Crisis Negotiator Unit also responded to the scene, as well as the Vandiver Fire Department.

At 7:30 a.m., Grimes left the residence on his own and was arrested without further incident.

Grimes is currently being held in the Shelby County Jail on $16,000 bond. Additional charges are pending.

FROM STAFF REPORTS The Montevallo High School volleyball team picked up three wins in pool play before falling in the... read more