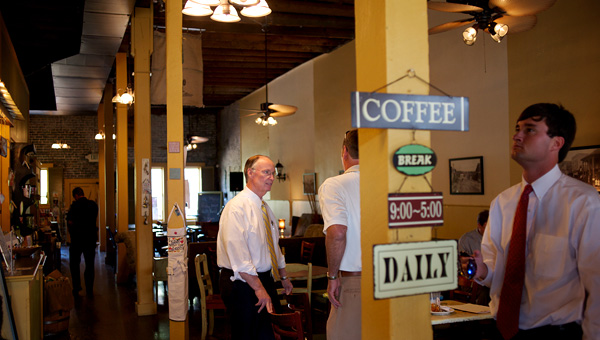 In between speeches in Helena and Alabaster, Republican gubernatorial candidate Robert Bentley chats with a customer at La Reunion cafe on Sept. 21. (Reporter Photo/Jon Goering)

HELENA — Republican gubernatorial candidate Robert Bentley spoke to a group of early-rising citizens in Helena Sept. 21 in the City Council chamber at 7:20 a.m. about the problems facing the state.

The Kiwanis Club of Helena hosted Bentley’s visit and asked him to speak on his plans if elected governor in November.

Bentley addressed the group about the problems he would work to change in the state if elected, including unemployment, the healthcare bill and illegal immigrants.

Creating jobs for Alabamians will be a priority, he said. Bentley said if he’s elected, he will not take a salary until the state reaches full employment.

Bentley stressed less involvement from the federal government, and the sovereignty of the state. 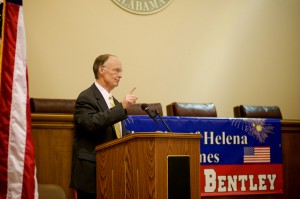 One example of this intrusion, is the health care bill, he said.

“I can tell you, if you want more old people to die quicker, you just keep this bill,” he said. “If you want less primary care physicians, keep this bill. Quality of care in this country is going to go down.”

If elected governor, Bentley said he’d like to make changes in the state’s capital including giving lobbyists less power to control the creation of laws.

“We need to clean up Montgomery,” he said. “It needs a good clean bath.

“The biggest detriment in this country and in this state is the lobbyists,” he added. “I just think the lobbying system is broken. I believe people should have advocates, I’m not saying that. But when lobbyist control legislation, it taints our government.”

Bentley said he also plans to address illegal immigrants in the state who cost taxpayers money, even if the federal government won’t.

“I’m very proud of Arizona for what they did,” he said. “They did what they thought was right for their state. I’m going to do what I think is right for Alabama.”

Bentley touched on the difference between himself and democratic nominee Ron Sparks, including their stance on abortion, immigration and healthcare reform.

Sparks was unable to attend the speaking engagement in Helena due to scheduling conflicts. Both Bentley and Sparks will be on the ballot for Alabama governor Nov. 2.