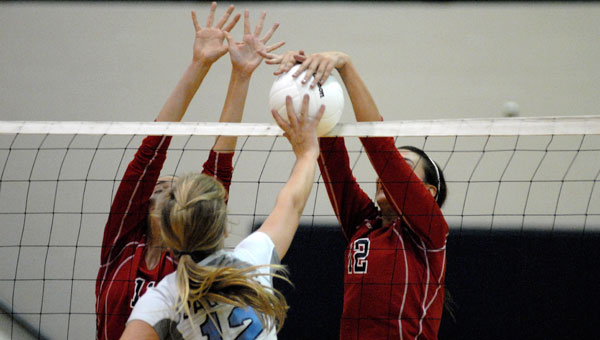 “I thought we started off slow, but we picked up the pace,” Oak Mountain coach Tammy Richardson said. “We’re really working not to worry about who it is that we’re playing. We’re working to just play our best, and to execute our game plan.”

Senior Chelsea Payne had a big game for the Eagles, racking up 33 assists to go with eight digs and three aces. Samantha Skinner registered 17 kills, three blocks and seven digs.

After dropping the first two games, Spain Park’s best chance to avoid the sweep came in the third game. The Jaguars battled back from an early 11-6 deficit to take a 15-13 lead midway through the contest.

Richardson said she was happy to see her team pick up the energy level.

“We’re doing some things with (the players) to try and get that pace going just a little bit faster,” Richardson said. “I think they did some good things tonight to encourage us in that area.”

Amber Shaw added four kills and a team-high 20 digs to go along with six service aces.