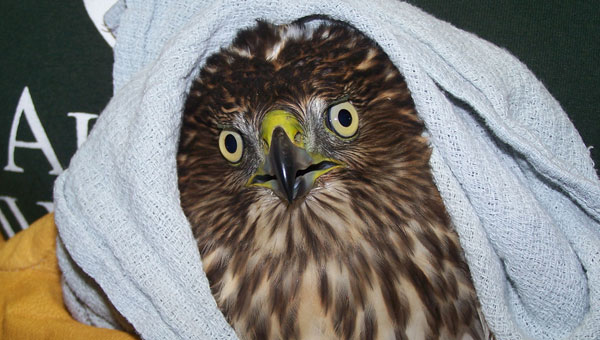 Employees and volunteers at the Alabama Wildlife Center in Pelham recently helped rehabilitate a Cooper's hawk after the bird crashed through a glass window in a Birmingham warehouse. (Contributed/Beth Bloomfield)

After two weeks of rehab and care, a potentially tragic story came to a happy ending for volunteers at the Alabama Wildlife Center in Pelham Sept. 22.

Following a potentially fatal accident at a Mill Steel warehouse in Birmingham on Sept. 8, a Cooper’s hawk made a complete recovery at the Wildlife Center and returned to the wild Sept. 22.

A Mill Steel employee called the Wildlife Center after workers at the facility noticed the bird trapped inside the building.

As Wildlife Center volunteers were gearing up to go rescue the bird, another employee called the center and reported the bird had escaped the warehouse by flying through a glass window.

But about an hour after the call reporting the bird had escaped the warehouse, the Wildlife Center’s doorbell rang. Center employee Lee McDonald arrived at the front door to find a Mill Steel employee with the bird.

“They were good folks. They actually found the hawk on the roof of the warehouse and climbed up there to get it and bring it in to us,” Bloomfield said of the Mill Steel employees. “The hawk was in guarded condition for a while. It was unstable when we first got it, and it had some head trauma.”

The female hawk also possibly suffered spinal trauma in the incident, and was unable to stand when the center first received her. However, the bird suffered no bone fractures, feather damage or cuts in the incident.

The center gave the bird steroids to cut down in inflammation, helped to hydrate her and placed her in a box with a device designed to keep weight off her legs. Two days after the center received the hawk, she had begun to use her legs again.

“We just got it some fluids and kept a close watch on it for a while,” Bloomfield said. “She made a slow but steady recovery, and we released her into the wild yesterday,” Bloomfield added on Sept. 23. “We are so glad when there is a happy ending, especially when it could have turned out bad.”