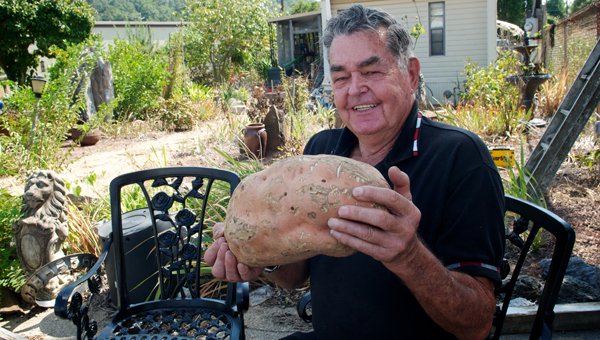 Otis Higdon shows off his 12-pound potato outside of his home on Sept. 23. (Reporter Photo/Jon Goering)

When Pelham resident Otis Higdon began seeding his garden earlier this year, he decided to plant on a patch of land he had never tried before.

Several months later, his gamble paid off in the form of some of the largest vegetables he had ever seen.

When Higdon began reaping his crops, he discovered a pair of nearly 6-pound sweet potatoes next to a giant 12 3/4-pound version of the same crop.

“I thought that was a little unusual, especially around here,” Higdon said. “I haven’t ever had anything close to that size before.”

Higdon maintains a small garden near his house off U.S. 31 in Pelham, in which he grows sweet potatoes, corn, cabbage, peas and other produce.

“My corn didn’t do too good this year because it was a little dry,” Higdon said. “But I’ve got about 60 head of cabbage out there right now.”

Despite his weather-related corn issues this growing season, Higdon’s garden is seeing one of its most productive years yet.

Higdon, who has been living in Pelham with his wife since 1975, said he learned many of his growing tips from his father, who was also a farmer. However, Higdon’s trio of larger-than-normal sweet potatoes likely would have put his father’s to shame, he said.

“My dad was a farmer too, and I think 2 pounds was about the biggest sweet potato he ever had,” Higdon said.

Because this year marked the first time Higdon planted on the small hill where he discovered the mammoth vegetables, he said he planned to keep using it in years to come.

“That was the first time I planted anything on that hill. When I went to dig it up, I found one that was 12 and three-quarter pound and two more that were 5 or 6 pounds all right there together,” Higdon said. “I couldn’t believe it.”

University of Alabama sophomore Brett Booth poses for a picture with a participant in the Field of Angels special-needs baseball... read more