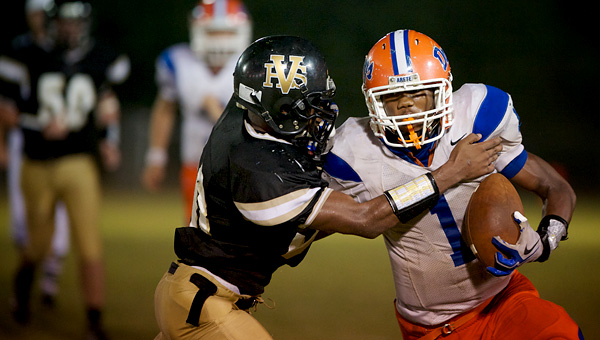 VINCENT — Montevallo High School junior R.J. Scaife had only one thought running through his mind as he returned to the sideline with the help of the Bulldogs’ training staff following a shin injury in the second half against Vincent. 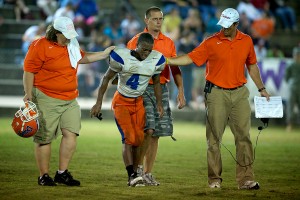 Montevallo's R.J. Scaife gets helped off the field after an injury during the game against Vincent.

Scaife knew he needed to get back on the field if at all possible to help the Bulldogs hold off the Yellow Jackets in the Shelby County Reporter Game of the Week.

Scaife made a successful comeback, rushing for a 21-yard touchdown with 1:53 remaining in the game to give his team a 7-point lead and picking off a pass seconds later to seal a 21-14 Montevallo victory.

“My teammates help me out,” said Scaife, who favored his left leg after the game. “All I can do is fight to get back out there and help out my teammates.”

Scaife, who rushed for 234 yards last week, gained 130 yards on the ground on 32 carries and scored two touchdowns for the Bulldogs. 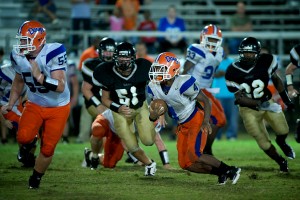 He received plenty of help from his teammates, including backfield mate Garrius Chappell. Chappell rushed for 145 yards on 22 carries and caught five passes for 66 yards and a touchdown.

Each team struggled in the first half. Vincent racked up only 28 yards on offense in the first 24 minutes. Montevallo gained 118 yards on offense, but Scaife coughed the ball up twice and Brett Gray missed a 30-yard field goal attempt as the teams went into the locker room at the break in a scoreless tie. 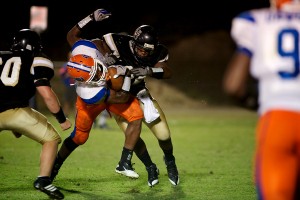 Montevallo running back Garrius Chappell takes a hard hit during a rush in Friday's game.

Montevallo put the first points on the scoreboard following a nine-play, 73-yard scoring drive to open the third quarter. Chappell reeled in a 15-yard touchdown reception from quarterback Taylor Burr and Gray added the extra point to give the Bulldogs a 7-0 lead with 8:03 remaining in the third quarter.

The Bulldogs added to the lead with 4:50 left in the third quarter when Scaife found paydirt from 3 yards out to push the lead to 14-0 following Gray’s extra point.

Vincent responded with an eight-play, 65-yard scoring drive, capped by a 7-yard touchdown pass from Demonte Johnson to Ben McKinney and a successful 2-point conversion by McKinney, to cut the lead to 14-8 with 2:53 left in the third quarter.

Following a Chappell fumble recovered by Vincent junior Ryan Brasher just before he crossed the goal line, the Yellow Jackets put together a nine-play, 99-yard scoring drive to tie the game.

The drive, which was capped by a 6-yard touchdown pass from Johnson to McKinney, featured a 32-yard rush by Shacorry Lilly on a fake punt on fourth-and-15 at midfield. A bad snap on the 2-point conversion attempt kept Johnson out of the end zone and left the game tied at 14-14 with 6:46 remaining.

The Bulldogs responded with a 10-play, 65-yard scoring drive to take the lead with 1:53 left in the game following Scaife’s 21-yard scoring run and Gray’s extra point. Scaife and Chappell combined to rush for all 65 yards on the scoring drive.

Scaife intercepted a pass by Johnson on the Yellow Jackets’ next offensive possession to seal the win. 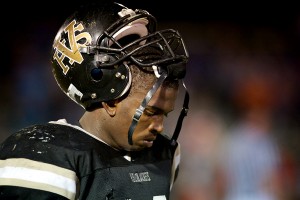 Following the interception that sealed the win for Montevallo, Vincent's Ben McKinney heads to the bench disappointed.

First-year Montevallo coach Jamie Williams said the success Scaife and Chappell had on the ground allowed the Bulldogs (2-3) to feature a simple game plan.

“We’ve got 40 plays and we ran about six of them tonight,” Williams said. “It was working. We talked about great defense, running the ball and a solid kicking game. That’s SEC football and that’s how we want to play. We preach it every week.”

Vincent coach Dwight Spradley gave credit to the Yellow Jackets (3-2) for fighting back from a 14-0 deficit to tie the game. Spradley said Vincent struggled with a lack of depth in the second half.

“We’re not short on heart,” Spradley said. “The guys could have held their heads down, but they showed a lot of heart and desire. We just couldn’t slow them down. We couldn’t plug the holes.”

Lilly rushed for 55 yards on four carries. Johnson and McKinney recorded 11 tackles each.