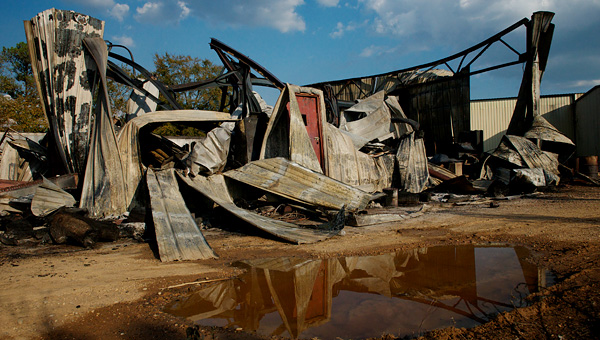 Reflected in a puddle of water, the remains builiding that burned down in Friday night's Hapersville fire stands beside the SCS Steel building. (Reporter Photo/Jon Goering)

HARPERSVILLE — A fire destroyed a building at Stallion Fabricating, Inc. off U.S. 280 in Harpersville Sept. 23 and appears to have been started accidentally, according to David Latimer, director of Harpersville public safety.

The fire appeared to be caused by grinding or cutting that was being done inside the building, Latimer said.

Firefighters responded to the scene at approximately 4:30 p.m. based on a 911 call reporting flames coming from the building, Latimer said.

When responders arrived, flames reached 15-20 feet above the building, he said.

“We were basically calling all the help we could muster,” Latimer said.

Both sides of U.S. 280 were briefly blocked off because of possible danger to drivers.

“There were oxygen bottles inside and we didn’t know exactly what we were dealing with inside the building,” Latimer said. “We were concerned that a propane or oxygen bottle might explode and endanger a driver.”

The building was destroyed by the fire, Latimer said. The fire was completely involved by the time the firefighters arrived.

“Basically the only thing we could do was resume a defensive response to prevent fire spread,” he said.

No one was injured during the blaze. One firefighter was treated for exhaustion and dehydration after the fire was under control, Latimer said. He has made a full recovery.

The building was owned by Sam Lynn and was located on the west side of SCS Steel Fabricating Inc.