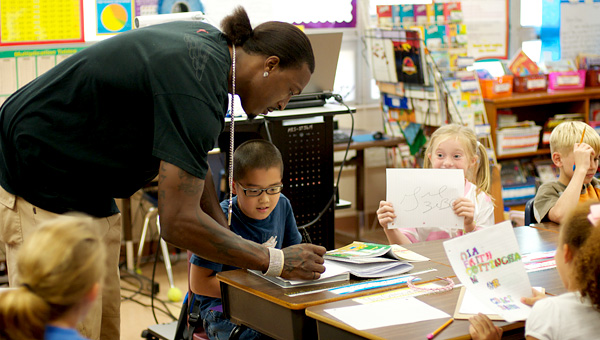 Wallace, who plays forward for the Charlotte Bobcats, encouraged the kids to study hard in school even if they want to be a professional athlete.

“Even if you’re successful in playing ball, you’re only going to play for so long,” Wallace told the class. “After you finish playing, then what are you going to do? It’s very important to get your education so you can put to use your skills and then always have something to fall back on. You should always have a backup plan.”

Wallace said he enjoys visiting schools and encouraging students to dream big and proving that those dreams can come true.

“It’s always fun to give back to the kids,” he said. “This is when dreams are started. It’s good for them to see good role models.”

While Wallace was at the school, principal Annie McClain had him help out with some behavioral issues. McClain called two students into her office who had recently been getting into trouble. She introduced them to Wallace who talked to them about behaving in school.

“The two of them are very good boys and extremely smart but sometimes their behavior gets in the way,” McClain said. “One in particular, his desire is to become a professional football player. I’ve always told him he can do anything he wants to do, but this behavior problem will get in his way.”

Wallace said he didn’t mind helping out and thinks the students might hear the message more clearly from him.

“I can get the message across more because I’m doing what a lot of kids are dreaming about,” he said. “I can push them to be the best they can be.”