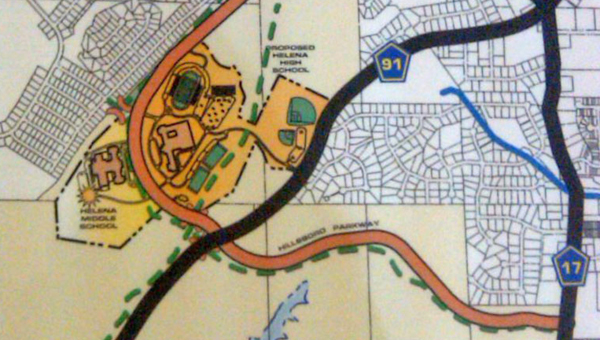 A map of Helena shows the possible location of a future high school.

HELENA — Several Helena residents were surprised to recently see a Helena high school listed on the capital plan for Shelby County on the State of Alabama Department of Education’s website.

Tom Ferguson, assistant superintendent of operations for Shelby County Schools, said the listing is a five-year plan and indicates that the Board of Education would like to complete the project in the next five years. The plan lists the project’s funding year as 2011.

“The state requires us to put together a five year capitol plan,” Ferguson said.“When funding becomes available, the idea is that we’ll have a plan.”

Ferguson said projects are listed on the plan regardless of if they are currently funded. Funding is not yet available for a Helena high school, he said. The plan lists the required budget for the school as $30,000,000.

“Even though they are things we want to do, we may not have the funding,” Ferguson said. “Helena High School is an example.”