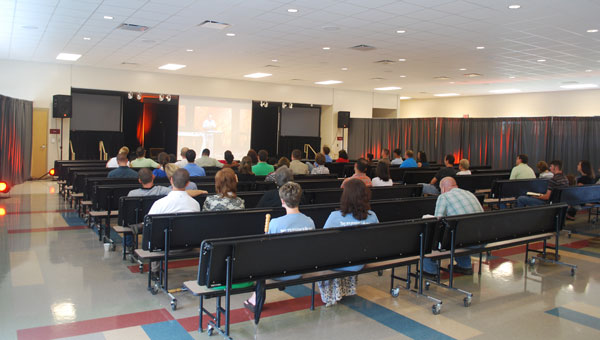 The Calera campus of Westwood Baptist Church transforms the Calera Elementary School into a place of worship.

CALERA — More people in Shelby County now have the opportunity to attend Westwood Baptist Church in Alabaster without having to make a commute. Westwood opened a Calera campus Sept. 12, becoming one of the first churches in the county to become a multi-site church.

Jason Seales, Westwood’s Calera campus pastor, said there are more than 2,000 multi-site churches in the U.S. that have proven to be successful in reaching people over a large region.

“We believe that more churches reach more people,” he said. “Our goal is to reach as many people as we can.”

Westwood had many members commuting from Calera, Seales said, who also lives in Calera. In an attempt to cater to members and expand the reach of the gospel, the church felt led to open their first campus at Calera Elementary School.

“With Calera being the fastest growing city in the state, we felt led there,” he said. “There were more and more of our people coming from Calera.”

The church hosts a 10:15 a.m. service at the elementary school every Sunday. The school is transformed in an hour using piping, drapes, lights and a rear projector, Seales said. The atmosphere is intentionally changed so that residents don’t feel like they’re just taking another trip to the school.

“We want them to feel like they’re coming to a place of worship, not an elementary lunch room,” he said.

The Calera campus has its own worship band that leads songs before the service. The sermon is then delivered via projector, allowing church attendees to view a video of Westwood’s main pastor delivering the same message at the Alabaster location.

The Calera campus also offers Sunday morning children’s ministries for newborns to 5th graders and hosts its own adult home groups throughout the week.  Other ministries and activities are shared between the campuses, Seales said.

“We are one church in two locations,” he said. “We share ministry and resources.”

The Calera campus sees between 170-235 attendees each week. The opening Sunday, the campus had 61 first-time guests, Seales said.

Seals said the intention of the campus was not to take away from other Calera churches, but to partner with them in spreading the gospel in the city.

“We want to change Shelby County with the gospel,” he said. “We didn’t go down to Calera because those churches aren’t doing a good job. They are. We just believe more churches can reach more people.”

In the future, the church might look into purchasing its own building for the Calera campus. For now, the school fits everyone’s needs, Seales said.

For more information on the campus, visit Ewestwood.org

Eugene Fulghum Chelsea Eugene Fulghum, age 80, a resident of Chelsea, passed away on Thursday, Sept. 23, 2010 at his... read more