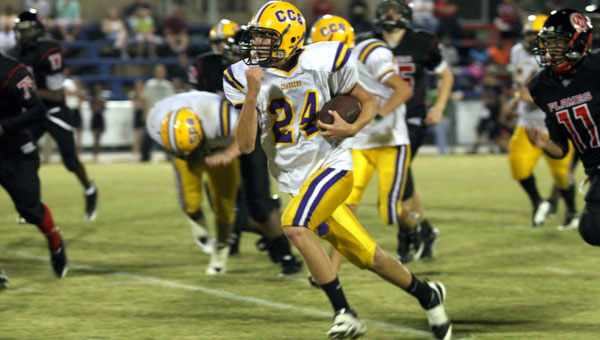 Cornerstone Christian School running back Chase Crumpton breaks away for a long gain in the Chargers' win Sept. 24. (Contributed/Cindy Wingard)

Cornerstone Christian School racked up more than 400 rushing yards for the second week in a row in a 31-0 win Sept. 24 over Flint Hill Christian.

Clayton Halbert added 91 rushing yards on 14 carries for Cornerstone, which didn’t have any passing yards.

Cornerstone coach Tim Smith said the Chargers changed back to a Wing-T based offense after an experiment with the spread offense resulted in an 0-3 start.

The Chargers (2-3) won their second game in a row with the victory over Flint Hill.

“We went back to the wing and it’s made us better,” Smith said. “We got back to doing what we do best. We’re trying to get better every week.”

Hagan Joiner picked off a Flint Hill pass in the victory.

Cornerstone will play host to Jackson Academy in an AISA Class 1A, Region 2 contest Oct. 1.

Briarwood Christian School running back Matthew Furuto is tackled by a host of Vestavia Hills defenders in the Lions' loss... read more