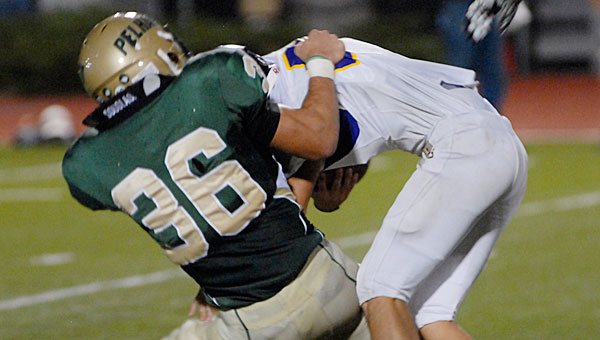 The Pelham Panthers shut down the Pleasant Grove High School offense en route to a 24-15 victory over the Spartans Sept. 24 at Ned Bearden Stadium.

The game marked the first loss of the season for the visiting 5A Spartans.

“This is a great win for our guys. We played a very good football team tonight,” said Pelham head coach Brett Burnett. “Like I say every week, it’s a journey.

“This is the result of a lot of hard work, and it’s good to see them get a win tonight,” Burnett added. “Our guys came out here ready and fought hard for this one.”

No score came until midway through the second quarter, when Pleasant Grove’s Jajuan Moore intercepted a pass from Pelham quarterback Gray Cato and ran it back 45 yards to score.

But Pelham blocked Will Burns’ point-after attempt, giving the Spartans a 6-0 lead.

Later in the second quarter, Pelham’s Tom Williams intercepted a pass from Pleasant Grove quarterback Ben Wheeler and ran it to the Spartan 34 yard line.

The Spartans then drove to the Pelham 7-yard line and added three points on a Burns field goal.

Pleasant Grove added another touchdown early in the second half, but again failed to add the extra point, putting the Spartans up 15-7.

The Panthers answered on the next drive when Haynes completed a career-long 50-yard field goal, closing the Spartan lead to 15-10.

On its next possession, Pelham scored on a 25-yard Harris touchdown run, and Haynes’ extra point gave the Panthers a 17-15 lead.

In the fourth quarter, the Spartans drove to the red zone before Pelham’s Derek Slaughter intercepted a Pleasant Grove pass in the end zone and ran it back 60 yards.

A few plays later, Harris powered into the end zone from 1 yard out.

Haynes’ extra point brought the score to 24-15 with 3:53 left in the fourth quarter.