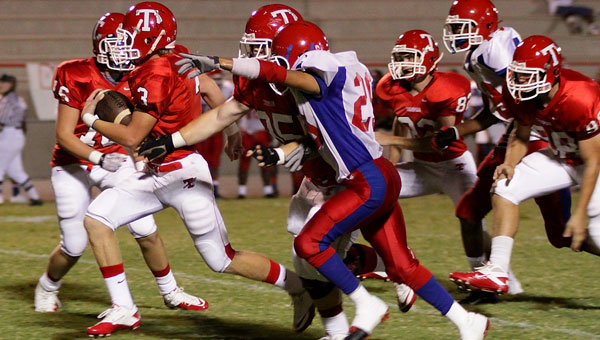 In a game that was a little too close for comfort, the Thompson Warriors stepped up big in the final quarter and made the plays necessary to pick up their first win of the season.

Three interceptions at critical points in the game, combined with strong defense in the fourth quarter, allowed the Warriors to escape with a 23-14 win Sept. 24 over Carver.

Holder Austin Sapp picked up the ball following a botched snap on a field-goal attempt and bounced off several Carver defenders to go 22 yards for the Warriors’  first score. Matt Nall’s extra point made it 7-0.

Forced to punt from their its own end zone, Carver gave up a safety to make it 9-0.

In the second quarter, Myles Rogers made the most of his one touch in the game as he punched it in from 2 yards out for the Warriors’ second touchdown.

“We fought through adversity tonight and found a way to win,” stated Coach Bruce Hill.  “I am proud of the ways these kids kept fighting and pulled out the win!”

After two touchdowns by Carver, the Thompson defense made a big stand to stop the Rams inside the 1-yard line on the 2-point conversion attempt following the second touchdown.

Thompson defenders Terry Carter and Kris Abrams each added interceptions in the final quarter of play with Carter taking an interception back 27 yards for a score to give Thompson a 23-14 lead.

Abrams clinched the win for the Warriors with his interception.