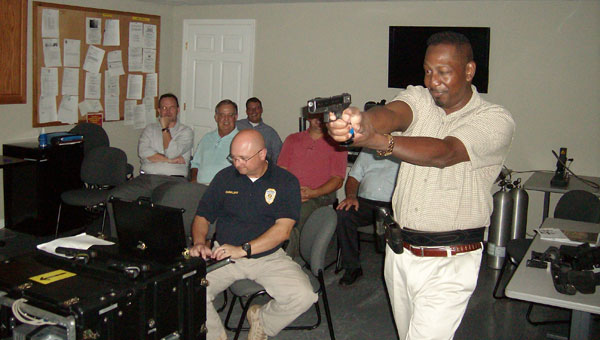 CALERA — The Calera mayor and City Council members moonlighted as police officers Sept. 20 making difficult decisions on what to do during a burglary, domestic violence situation and active shooting.

The group was participating in the Firearms Training Simulator, an annual training used at the Calera Police Department to train officers to make good decisions under pressure.

The training system uses a large projector screen and laser firearm, said Police Chief Sean Lemley. The system works by allowing the officer to interact with characters on the screen in different law enforcement scenarios. If needed, the firearm shoots a laser at the screen and the characters react accordingly. The officers can then go back and review the rounds.

“It’s a really neat system,” Lemley said. “It’s almost like a Wii game, but a heck of a lot more expensive and it does a lot more than a Wii game.”

The scenarios are not all shooting-based, Lemley said. The training focuses more on how the officers deal with the different situations.

Lemley said he invited the mayor and council members to participate so they could see first-hand what the officers encounter on a daily basis.

“I also wanted them to see what type of training we put our people through,” he added. “They need to know that we do everything we can to make sure our officers are the best-trained.”

Mayor Jon Graham said participating in the training gave him a new appreciation for the dangers local officers face in every situation.

“It was a good training and it was good for the council to attend,” he said. “I understand now that their job is very technical and you have to be able to negotiate with people and talk to people as you attempt to extinguish a bad situation.”

Lemley said each member of the council took a turn on the training simulator, staying at the department until 9:30p.m.

“Our police department is very appreciative that they would take the time out of their personal schedules to see what we go through,” he said. “We are blessed to have a mayor and city council that care so much about the well being of our community.”