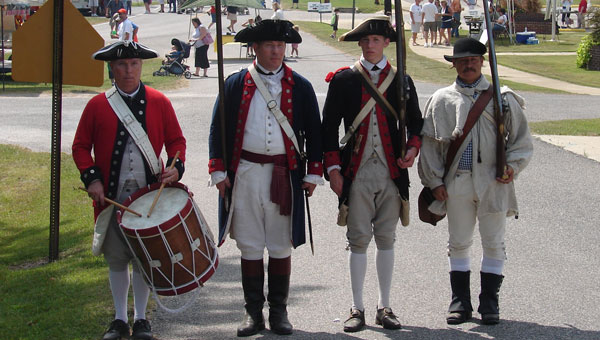 The Alabama Pipes and Drums organization from Birmingham, as well as men dressed up from the Revolutionary War Camp, could be seen in full gear.

Mayor Rosemary Liveoak and all of the council members attended the celebration to answer questions and talk about the future plans for the town of Wilsonville.

There was a turnout of around 300-400 people who attended Whigmaleerie Day, as the streets were closed for the day. There were also a total of 43 individual vendors at the event and several more informational booths as well.

The Coyote Grill took the top awards for the chili cook-off, which was hosted by the Town Hall.

Everybody visited the live Revolutionary War Camp, which was enjoyable and educational for everyone, and there was a military commemoration. There was also a history booth set up with albums full of pictures and articles for everyone to look at and enjoy. The antique car and tractor show was sponsored by D.J’s BBQ, and brought back pleasant memories for many who attended. Many of the children took part in the pony ride. There was also a train ride and a rock and roll ride for children to enjoy.

A march down Main Street was made at noon by a group of the Alabama Pipes and Drums organization from Birmingham. They were dressed in kilts with bag pipes and the works. They also played arrangements for the crowd.

Local bands and singers also shared their talent throughout the day in the center of the town.

This fun festival will continue annually as there are already plans for next year’s even larger event.

Pam Northcutt has worked for the Shelby County School system for 18 years now. She currently teaches the After School... read more