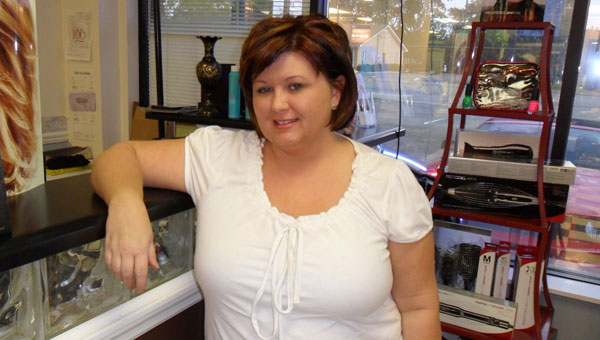 Kelly Schrader-Wilson takes a faith-based approach toward her life and her Alabaster salon, Pure Faith.

Living her life on “Pure Faith” most certainly has not been an easy path for local beauty salon owner Kelly Schrader-Wilson.

Disappointments, failures, detours and the devil himself can trip you up. Schrader-Wilson has a firm grip on reality, however, and “bounces back” and stays “up” because of her own pure faith.

“I am the hands and feet of Jesus,” she said.

As a child she was very creative. “Fixing hair” was just one of her creative ventures.

Raised in the Birmingham area and educated at Brooklane Academy in Hueytown, she attended Step Ahead Cosmetology School. After working for franchise shops and individuals, she knew in order to work in a Christian atmosphere, she would need to be her own boss.

During the past several years, she has owned and operated Schrader Salon in Southside then in Saginaw. Shelby County was appealing to her as she enjoyed the more relaxed lifestyle.

Five years ago, she purchased the vacated Four Seasons shop and “Pure Faith” was born.

Her employees are Kelly, Kim, Marian, Crystal, Jessie, Sharon, Jim, Toni and Fawn. Together they boast more than 90 years of experience in giving customers the color and style they seek. Texturized haircuts and dimensional color are specialties. Schrader-Wilson requires continuing education for her employees and uses the best products on the market.

Schrader-Wilson and husband, Anthony Wilson of Shelby, met when he came in for a haircut.

They share their faith at Abundant Life United Pentecostal Church. One of Kelly’s favorite Christian involvements is participating in Karen Wheaton Ministries at the RAMP in Hamilton.

She has a picture board displaying the activities at the RAMP, which include prayer, games and baptisms.

Between running her shop, being involved at church, being a friend and good listener, and being Anthony’s wife, Kelly has a love of cruises. Her favorites are Grand Turk, Half-Moon Bay and the Virgin Islands.

For several years, Kelly was a Paul Mitchell associate.

Her many hours of training have served her well. In the future she hopes to open at least one more shop in the Calera area.

When I ask her where she could see herself in the next 15-20 years, the answer was straight forward: “to wherever and whatever Jesus calls me.”

Alabaster’s Bill Currie has a rich military history and a love for flying. In 1941, Bill Currie worked 70 hours... read more