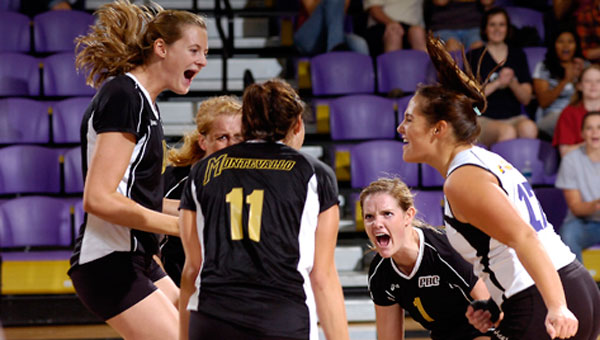 The University of Montevallo volleyball team is the last remaining unbeaten team in Peach Belt Conference matches following a 25-20, 25-14, 20-25, 25-15 win over Flagler College to take sole possession of first place in the league Sept. 25.

The 4-0 start is the best conference start at Montevallo since 2003 when the Falcons started out conference play 6-0. Ati and Clay led the team with 15 and 11 kills, respectively.

Garrison had a double-double with 36 assists and 11 digs. Wilson led the team in digs with 17.

Dowd led the Falcons with 14 kills and a team-high 16 digs. She also added three block assists.

Garrison also had a double-double with 49 assists and 11 digs. Ati led the team in kills with 15 while registering a team-high four blocks, including two solo blocks.

Wilson had 16 digs to tie for the team lead. Guidry added 15 digs.

The Falcons (7-0-1, 2-0-1 PBC) received goals from seniors Milan Pualic and Nathaniel Foster, who was named the Peach Belt Conference’s Player of the Week.

Freshman goalkeeper Brendan Ledgeway picked up his third shutout of the season with three saves. He improved his record to 7-0-1 in net for the Falcons, who moved up to No. 6 in the latest National Soccer Coaches Association of America poll.

An own goal just four minutes in overtime gave the Falcons a 2-1 win Sept. 21 over Christian Brothers University.

Montevallo trailed 1-0 until a Daniel Pelletier goal with five minutes left in regulation tied the game at one. Ledgeway finished with five saves.

The University of Montevallo women’s soccer team dropped both matches last week following a pair of 1-0 losses to Christian Brothers University and UNC-Pembroke.

The Falcons (2-6, 0-3 PBC) fell to Christian Brothers in overtime Sept. 21. Montevallo keeper Alyssa Maxwell made a diving attempt to take away the ball from an opposing forward, who found a teammate open for a shot at the wide-open net.

Freshman Kaitlin Thomas made her first start in goal for the Falcons in a 1-0 loss Sept. 25 to UNC-Pembroke. Thomas stopped three shots while allowing just one goal. 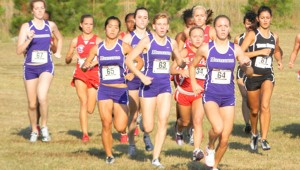 The women finished fifth in the women’s team standings at the event hosted by the University of West Florida.

The Falcons’ top runner was freshman In-Mi Matsunaga, who finished 16th overall with a time of 19:59.50. Matsunaga’s time is the 10th fastest 5K time in Montevallo history.

The men team finished seventh in the men’s team standings.

The Falcons’ top runner was freshman Mark McDonald, who finished 14th overall with a time of 28:30. McDonald’s time was one second faster than his previous best time this season.

FROM STAFF REPORTS Mark McGuigan has been named the new head women’s tennis coach at the University of Montevallo. McGuigan... read more